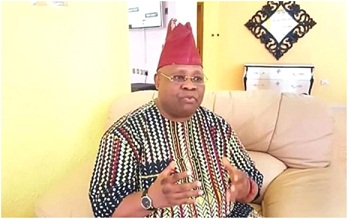 Osun State Governor, Senator Ademola Adeleke has assured that the present administration will not leave any stone unturned in the pursuit of an enabling environment that will help buisness thrive in the State.

The Governor who was represented at the occasion by the Secretary to the State Government, Alhaji Teslim Igbalaye said the administration is putting in place measures to make the State more viable, economically buoyant and sustainable.

He said there are steps already being taken that will translate into the emergence of Small Medium Enterprises in the State which will at the long run boost the economy of the State.

The State helmsman added that the State will definitely key-into the African Continental Free Trade Area (AFCFTA), to deliver great benefits in terms of jobs creation, growths and poverty reduction.

While commending the organisers of the fair, the Governor stressed that the fair is a major step geared towards fostering investments and business opportunities in the State, explaining that Osun is on the path to full and robust industrialization.

Speaking on the theme of the trade fair, “Leveraging on AFCFTA for Enhancing SME Growth at Sub-National Level”, Senator Adeleke said It was very apt and in tandem with the current trend in economic transactions and development.

“The fact that Trade Fairs are veritable platforms for the advancement of individual, corporate and National ingenuities can never be over- emphasised. This Trade Fair will no doubt help to showcase the economic potentials of the State from the grassroots, particularly in the area of exportable made-in Osun products”,The Governor stated.