Adeleye thanks God for healing, promotion 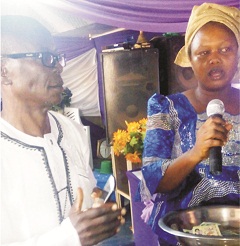 By Olusola Alatise
|
The Holy Bible says; “oh give thanks unto the Lord, for He is good for His mercy endureth for ever.” This quote captures the motive behind the thanksgiving service organised for the newly appointed substantive Director of Appointment and Posting of the Ondo State Local Government Service Commission, Mr O. C Adeleye as he led his family and friends to  his church in Akure for thanksgiving.

At the service held at CAC Agbara Isodotun, Akure, Adeleye narrated how God had been showing mercy and favour to him particularly regarding his appointment and his health.

“I am using this opportunity to appreciate the Lord for His mercy and favour in my life, these are unquantifiable. I was critically sick and God healed me. I had been in acting for a very long time which is unusual in the civil service, my appointment as a substantive Director is to His glory despite all odds.

Delivering a sermon at the well attended service, Prophetess Taiwo Adewole, Founder of CAC Agbara Isodotun, described Testimony and thanksgiving as ways of appreciating God’s blessing in one’s life and for others to learn from it.

“When you testify to the goodness of God in your life, you are not only thanking Him but also showing the Power and Mercy of God to other. By that, it is a way to propagate the gospel of Christ”

“If you fear God you will do things rightly, you won’t kill or harm others for whatever reason. The Genesis of all crime in our society is the lack of fear for God. The fear of God is the beginning of wisdom, she said.”