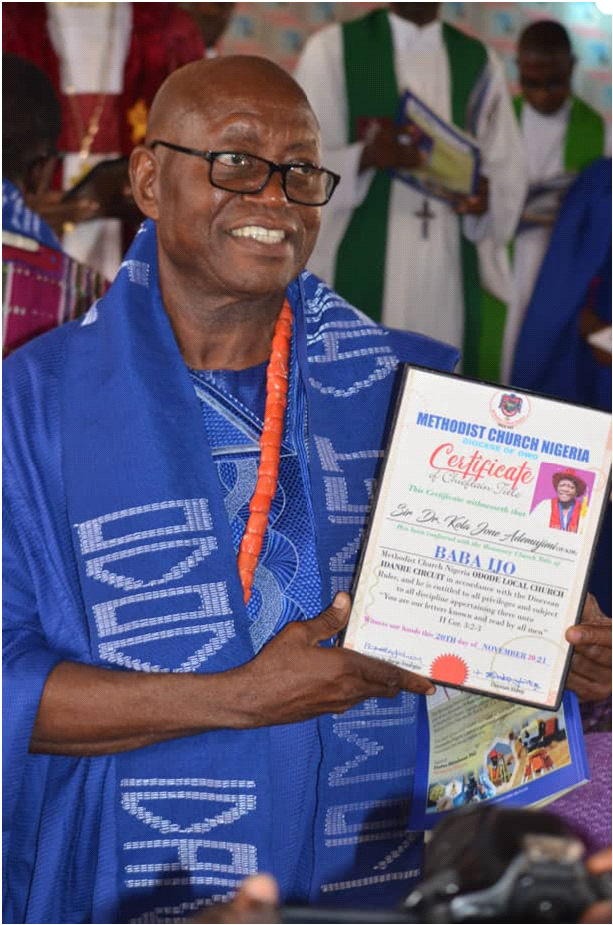 The former Chief of Staff to Ondo State Governor, Dr. Rahman Olusegun Mimiko and Otun Ajiroba of Idanre kingdom, Sir Dr. Chief Kola Jones Ademujimi was installed as the “Baba Ijo” of Methodist Church, Idale Idanre, Ondo State.
The church was almost filled to the brim by 10.00am when Rt. Reverend Solomon Abayomi Adegbite, the Lord Bishop of Owo Diocese of Methodist Church, Nigeria, ushered in other ministers of Methodist fold and the choir into the spacious Methodist Cathedral, Idale Idanre venue of the epoch making event. The Choir of the church kick-started the programme with praise worship and gospel related songs to set the minds of the congregations in right spiritual frames for the event. 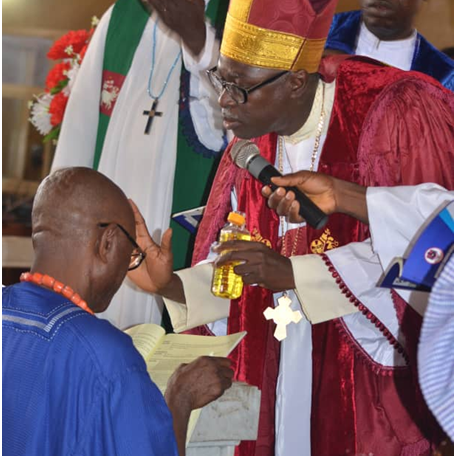 After the usual church service rites Rt. Reverend Adegbite mounted the pew and called on Sir Dr. Chief Kola Jones Ademujimi and the other seven new chiefs that their calls were not for mere social symbols or another avenue for self aggrandizement and egoism but rather a call for more services and thus beseeched them to be ready to spend and be spent. He told Sir Dr. Chief Ademujimi that he must henceforth be more above board in everything he did as he must always strive to be like Jesus Christ in all the actions he is involved in.
He prayed for him to excel in the task of church building and evangelism which had been given unto them.
Speaking during the programme, former Governor of Ondo State, Dr. Rahman Olusegun Mimiko, under who the new Baba Ijo served as Chief Of Staff expressed his happiness that the church had picked Sir Dr. Chief Ademujimi as the Baba Ijo and assured the church that they have made a right choice in him as Baba Ijo because he is a man that will plough all his human and material resources into any cause he believes in. The former Governor used the occasion to lament the pitiable state of things in Nigeria and opined that the Nigeria nation needed “check up” but prescribed prayer as the solution because as he said, God knows what we are passing through and will eventually lead us to the solution of our problems.
Prominent personalities in politics, civil service and all areas of human endeavors like Hon. Tajudeen Adeyemi Adefisoye, MHR representing Idanre/Ifedore Federal Constituency, Deputy Governors Dr. Agboola, Dr. Oluboyo, former Commissioners Yemi Olowolabi and Dr. Kayode Akinmade, APC Chairman in Ondo State, Engr. Ade Adetimehin, Executive Chairman of Idanre Local Government, Hon. Prince Kayode Adebambo Aroloye, His Imperial Majesty, Oba (Dr) Frederick Adegunle Aroloye, Arubiefin IV (JP) OFR, Owa of Idanre kingdom and Paramount ruler of Idanre Land, ably represented by his Oloris, His Royal Majesty, Oba Gilbert Ogunlowo, Aduranjan I, the Awosunye of Atosin Idanre, High Chief Macdonald Oladipo, the Lisa and regent of Alade Idanre and other prominent Idanre sons and daughters graced the gathering. 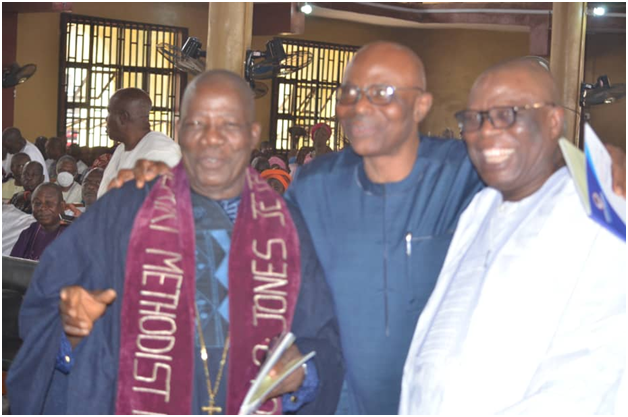 Speaking with The Hope shortly after the programme, one notable member of the church, Sir High Chief Emmanuel Adetuyi, a Knight of John Wesley expressed optimism that Sir Dr. Chief Ademujimi has all it takes to lead the church to desirable and admirable status because of his experiences, commitment and zealous passion for the work of God. Donations were collected for the completion of the new motorized borehole in the vineyard of God under the auspices of the new Baba Ijo who mobilized his friends, political associates, club members and professional colleagues to contribute the large sum of money realized.
The reception ceremony was held at L.A. Field near Oja Owuro where Segun Wonder and his group thrilled the large gathering of guests with his brand of music while Lanre Kehinde Adesuyan ably provided rib cracking jokes as interludes to dances by various groups with the celebrants who provided assorted meals, both foreign and local, for their satisfaction. 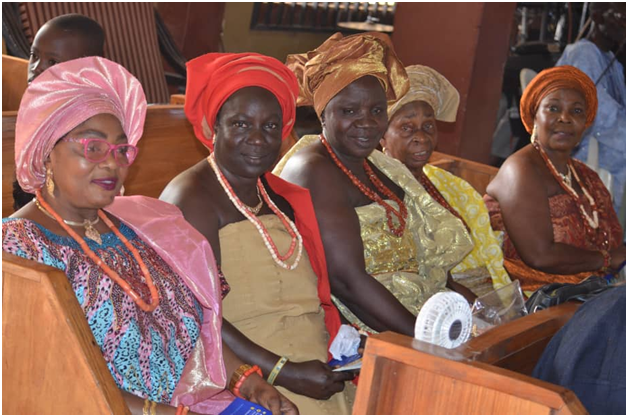 In his comment after the reception, Sir Dr. Chief Kola Ademujimi, the new Baba Ijo thanked God for choosing him and prayed that He fortifies him with the enablement to perform up to His expectations. He promised that he would try his best possible not to disappoint God and all those who appointed him.

‘How language, literature can address corruption’