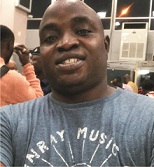 Agbelusi Ganiyu
|
In obvious response to His Imperial Majesty, Oba (Dr) Frederick Adegunle Aroloye, Arubiefin IV, (JP) OFR, Owa of Idanre’s call for Idanre indigenes, home and abroad, to remember their people back home,  Mr. Ogunmakin Adenola has promised to pay the school fees of all the pupils in the Primary School he passed out from for the next academic session

Adenola, popularly called, “Oluomo”, who is based in United Arab Emirates also disclosed that he will supply all the writing materials and textbooks for all the pupils of Methodist Primary School, Idale Idanre where he passed out way back  1991.

He siad revealed that has decided to take the responsibilities upon himself because he sees it as a way of giving back to the community that produced him and also because of His Concern for the poor in the our society.”

Ogunmakin, who is the CEO /MD of CHADFUN Global Resources Nigeria Limited, and Idanre son, said that he plans in the nearest future, to widen the scope to take full responsibility of indigent students school fees, uniforms and other academic needs in secondary schools.

“Helping the poor and the needy by helping to solve their problems is one of the things that give me joy because I know that there is nothing one can achieve without the grace of God,” he added.

Methodist Primary School, Idale Idanre is one of the populous public schools in Idanre Local Government Area of Ondo State.

Mr. Ogunmakin Adenola has been helping many indigenes of  Idanre to also seek greener pastures abroad and assisting them where need be.

Meanwhile, his Imperial Majesty, Oba (Dr.) Frederick Adegunle  Arubiefin IV, (JP) DFR has commended Ogunmakin Adenola for the gesture and advised other young ones like him to emulate his good deeds.