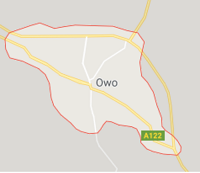 Mr. Adewumi who was the leader of the Legislative House between 1999 and 2003 during the late Pa Adebayo Adefarati regime scored a total of five votes cast by the five member Upenmen Kingmakers to beat his co-contestant Prince Matthew Olawole Folarin who scored no vote in the election that took place at the Olupenmen palace yesterday.

In his acceptance speech, the 47 year old Olupenmen elect thanked the Upenmen kingmakers for a rancour free exercise.

While appealing to the people for their support, he assured them that he would work tirelessly for the development of the town.

He however extended a hand of fellowship to his co contestants, to join him in the task of making the town the dream of every indigene.

Speaking with The Hope shortly after the announcement of Prince Adewumi as the Olupenmen-elect, his co-contestant, Mr. Olawole Folarin described the election as not only free and fair but transparent.

Folarin declared his support for the winner and expressed his readiness to work with the new Olupenmen elect to take the town to a greater height.

Earlier, one of the kingmakers who is also the head of Agheleja quarters of the town, High Chief Idowu Owadara disclosed that necessary arrangementts were made for a peaceful election.

Owadara disclosed that the two contestants who participated came from the Ayiwoye ruling house whose turn is to produce the next Olupenmen.

He appealed to the people to maintain peace and allow the process to go without rancour.

The election was supervised by officials of Owo Local Government led by its Director of Local Government Administration. Mr. Olusegun Omojuwa according to the Chieftaincy Laws of Ondo State.