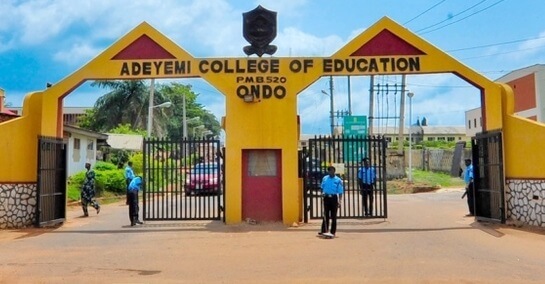 From Sade Adewale, Ondo
|
To reward merit and boost academic excellence, Adeyemi College of Education, Ondo has absorbed 17 students of its Fellowship programme into its workforce.

The graduate fellowship programme was introduced in 2017 whereby brilliant graduates of the College are retained in the College under the Teaching Assistantship scheme.

The scheme provides for the engagement of the best graduating student in each department with a minimum of 4.00 CGPA for a period of two years.

Speaking recently at a media chat, the Provost of the College, Dr. Samuel Akintunde explained that the scheme is one of the programmes initiated as a way of discouraging students from engaging in vices capable of truncating their studentship and to encourage them to be dedicated to their studies since there is a reward for excellence.

He said not less than 18 of them were involved in the “teaching fellowship scheme” while . one of them later got internship in Turkey.

In his words :”The teaching fellow is not a full employment as the stipend paid is paltry. It is meant to give the beneficiary opportunity to start a masters degree programme and have experience of teaching as assistant lecturer for two years to boost their prospect for jobs as lecturers anywhere in the world.

“It is expected that those who are able to find alternative employment among the teaching fellows before the expiration of the two years are free to move ahead in their career. Participation in the scheme does not translate to automatic employment for the beneficiary.

“However, the first set  of beneficiaries were lucky that they were absorbed as approval to replace a number of former staff was granted to the College at a time they were still engaged in the teaching fellowship”, Akintunde stressed.