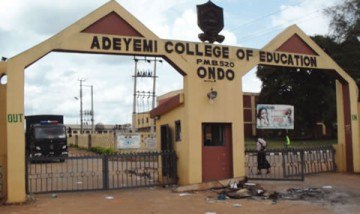 From Ondo Victor Akinkuolie, Ondo
|
Tragedy struck at the weekend in Ondo city, headquarters of Ondo West Local Government area of the state, following the death of a year-three degree student of Adeyemi College of Education (ACE)  Ondo.

A source close to the Students Union Government (SUG) of the institution, said the victim whose name was given as Akinmolayan Feyisetan, a student of  the Mathematics department of the institution, was said to be hale and hearty before the unfortunate incident.

The deceased was said to have on the fateful day attended a fellowship and a prayer meeting organised by the Catholic Students Association in the institution.

The source further added that the late Mathematics student, who resided in Oduduwa street in the town and one of the students who live off-campus in the school was said to have complained of abdominal pains to his fellow students and was advised to go to the health centre of the institution before he later slumped.

The late Feyisetan was said to have been rushed to the Emergency Unit of the Health Centre in the institution by his colleagues.

However, in spite of his early arrival at the hospital and quick intervention by medical experts all efforts made to revive the late Mathematics student proved abortive as he was later confirmed dead by doctors.

Meanwhile, the news concerning the death of the victim almost paralysed academic and other activities in the institution, as the remains was immediately moved to the morgue of the Ondo State Specialist Hospital, Ondo city while arrangement was made to contact his family.

When our correspondent arrived at the hospital, several staff of the institution including the Dean of Students Affairs, Mr. Olasanoye as well as the President of the Students Union of the institution, Comrade Abidemi Zubir, were noticed making frantic efforts to deposit the corpse at the mortuary.

Similarly, several students, especially those from the Mathematics department and his neighbours were seen gathered in groups with their faces wearing gloomy look while some were seen crying and wailing over the death of the student who they described as an obedient and easygoing student.

The victim until his death was said to be an active member of the Catholic Students Association in the institution and had represented the Mathematics department on several occasions at various competitions.