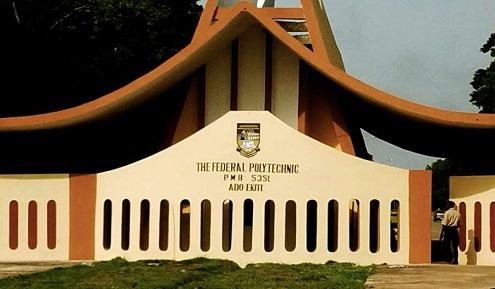 as 66 scholars get merit awards

Speaking at the ceremony which was attended by dignitaries from all walks of life, the Rector of the institution, Dr. Dayo Oladebeye, warned all students of the institution to shun all anti-social activities that may truncate their stay in the polytechnic.

The polytechnic helmsman said  the school will continue to maintain a “zero-tolerance for all anti-social behaviours such as examination misconduct, prostitution, cultism, sexual harassment and any form of social vices”.

He , however advised all the new students to keep to the matriculation oaths and steer clear of any form of activity that will truncate the academic calendar.

The Rector, while cautioning against any form of vandalization in the institution, noted that any wilful destruction or damages will not be taken lightly,  as  concerned students would be made to face the full wrath of the  law.

Oladebeye, told the students that “it is compulsory for all students to pass all the entrepreneurship courses as a necessary condition for graduation”

While calling on them to be good students during their stay in the institution, he  enjoined  them to report any threat to their academic well-being to the Students Affairs Office or the Counselling Officers in the Guidance and Counselling Unit who will readily assist them to solve the problem.

He pointed out that “no student  under any circumstance is allowed to tamper with or alter any structure by the use of any form of partitioning, changing the wiring system or any such unlawful act, saying the “use of electric cookers, hotplates or boiling rings in the hostel is also prohibited”

At the ceremony, 66 scholars in ND and HND were  accorded  recognition for their scholarly disposition to serve as motivation for the fresh students.

The awardees will receive a sum of N10,000 cash together with the Certificate of Merit  presented to them.

Oladebeye, however, regretted the dwindling fund at the disposal of the institution as a result of the nation’s economy and the Internally-Generated Revenue, ( IGR), of the school, which  he said has negative effect  on the standard of  education and peace in higher institutions in Nigeria.

He also, identified the absence of municipal services such as electricity supply and potable water with the resultant effect of depending on many high-powered generators and several boreholes on campus as a threat to education, noting that the overhead cost is better imagined than experienced.