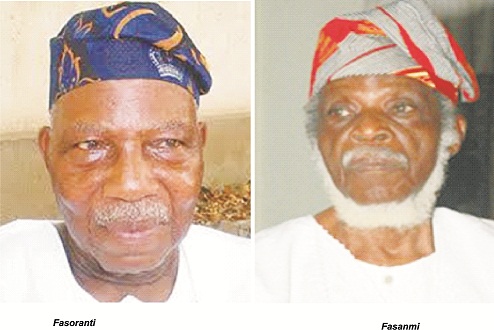 By Sina Ogunjobi
|
It is a Yoruba sociopolitical group. Its main agenda is to protect interests of yorubas in Nigeria. Lofty as this agenda may look, internal bracketing and political interests among its members seem to be a great challenge for the group from achieving this dream.

Afenifere a sociopolitical group in the southwest Nigeria is presently factionalized into two with both factional groups supporting the two major presidential candidates in the country.

The Senator Ayo Fasanmi group last week Thursday declared that it will on Tuesday 29th January 2019 formally endorse the candidature of President Muhammadu Buhari as its preferred presidential candidate ahead of the 2019 general elections.

It made decision known shortly after its meeting held at the House of Chiefs, Secretariat in Ibadan, the Oyo State capital.

Fasae who spoke on behalf of the faction said that Buhari has performed well and deserves another term in office.

He added that the Chief Ayo Fasanmi-led Afenifere is the authentic Afenifere, claiming that the one led by Chief Reuben Fasoranti is not part of Afenifere.

Fasae said, “I just said it now, this is not a faction. I said that the Afenifere we know in Yoruba land is a progressive movement and this is where we are today in Ibadan and the other Afenifere that is talking about Atiku, the Ayo Adebanjo group is not part of Afenifere. They are usurpers in the group”.

Chief Ayo Adebanjo, who spoke on behalf by Chief Rueben Fasoranti led faction had told journalists in September that the group will support the candidature of former Vice President, Alhaji Atiku.

Chief Femi Aluko, former commissioner for Information in Ondo State is not happy with the fate of the group. According to him, Fractionalization of Afenifere not in the best interest of the Yoruba race: Yoruba in this kind of situation will suffer for it politically.

Yinka Odumakin, publicity secretary of Fasoranti group while responding accused the former Governor of Lagos State and National leader of All Progressives Congress, APC, of complicity in the crisis. Speaking with newsmen on Friday, Odumakin, said it was “unfortunate” that Tinubu, who had discredited Afenifere, could organise such a charade.

He said most of the people at the gathering where Buhari was endorsed were strangers to the group.

Odumakin said the “renegade” group was only taking advantage of Senator Fasanmi who was advanced in age.

The Afenifere, Odumakin said, “That is a fake Afenifere group powered by Bola Ahmed Tinubu. If you look at the names of the people at that particular group, the only person that was once with us is Senator Fasanmi and we believe they are just using him.

“The masquerade behind this entire show is Bola Tinubu, who has plenty of money. Why is he hiding under Afenifere? Haven’t he and his people been disparaging Afenifere? Why has Afenifere suddenly become attractive to them?

“When Afenifere was fighting for the rights of Yoruba people attacked by herdsmen in Ile-Ife and in Akure, where was Bola Tinubu? Suddenly, he remembers Afenifere because elections are here.

These open endorsements of presidential candidates by the two groups have brought to the fore cracks among the players of this once powerful sociopolitical group in Yoruba land.

Chief Adebanjo, who disclaimed the Fasanmi group believes Afenifere was still one. He said that the other group’s action does not amount to a crack in Afenifere.

His words: “I don’t know them. People know those who are Afenifere. They are part of APC. Let people who follow them lead them to the elections; we shall know those who will show the direction. “They are only claiming to be real Afenifere; they are entitled to their own opinion and anybody can claim anything, but people know who they are. So, there is no crack in Afenifere; there is a splinter group claiming that it is Afenifere. It is the media that is emphasizing it. “People should question them on where they have been all these days? Their leaders are in APC; they are the few that went with Bola Tinubu.

Fasae however did not also believe that their is a division among them. His words: “Yoruba is not divided; there are not so many Afeniferes. Yoruba is a nation and even during the time of Baba Awolowo, there were dissent voices, so we are not embarrassed. “Our group is led by the longest living senator in Nigeria, Pa Ayo Fasanmi, and you can see everybody there including Senator Biyi Durojaiye, Dr. Omololu Olunloyo, Baba Olusi and many others in Yorubaland who are not renegades with us.

Afenifere was another name given to the Action Group, AG, in 1945. It’s leader was the late sage, Chief Obafemi Awolowo and given sobriquet, Afenifere by Chief Meredith Akinloye . It was established in Owo, country home of Chief Adekunle Ajasin. Ajasin was the Governor of Ondo State between 1979 to 1983.

The group came back to life in 1990 and became the major platform used to confront the military Junta over the annulment of 1993 presidential election which was won by Late business mogul, Moshood Abiola, Social Democratic Party, SDP.

He contested against Alhaji Mohammed Tofa, National Republican Congress, NRC. The election was adjudged to be the fairest and freest in the history of Nigeria.

Abiola lost his life while struggling for the actualisation of the election.

The group sponsored a political party in 1999, Alliance for Democracy, AD. But its inability to manage crisis over the choice of its presidential candidate and undue trust of president Olusegun Obasanjo while in office dealt a mortally blow on it.

Chief Olu Falae from Ondo State and late Chief Bola Ige contested at the party primaries for the presidency but Falae was picked above Bola Ige.

There had been no love lost between Bola Ige group, personified by members from Oyo and Osun States and the ‘Ijebu mafia’ led by late Chief Ajayi Olanihun and Chief Adebanjo.

Bola Ige and his group were not happy that Falae was picked and signaled the beginning of the crack within the group. To the Bola Ige group, Afenifere should divest itself of any political affiliations. Bola Ige thus, founded Yoruba Elders Council, YCE, led by late justice Wale Thompson.

Prior to the 2003 election, Afenifere entered into agreement with President Olusegun Obasanjo not to sponsor any presidential candidate.

The agreement and president’s refusal to honor his side of the agreement made the AD lost states it controlled leaving Lagos State, with Tinubu as the Governor.

Tinubu ceased the opportunity to take over the political leadership of the south west by sponsoring candidates in all the states in the region.

Leaders of Afenifere were not happy with such and resolved not to be in the same boat with Tinubu.

Another reason for the crack was the overbearing influence of the older members of the group. This accounted for founding of Afenifere Renewal Group, led by Ogbeni Wale Oshun. The group at its inaugural meeting with some section of the press accused the old one of undue influence. Present at the parley include Yinka Odunmakin, Babafemi Ojudu and others. Odumakin has today retraced his step back to the old Afenifere while little is being heard of ARG.

Supporting Atiku by Fasoranti led faction may not be an easy sell. Reason being that Gbenga Daniel, Atiku’s Campaign head has always been closer to the leadership. Even while as Governor of Ogun State. Therefore little efforts would be used to persuade them to support Atiku’s presidential aspiration.

However concerns are being entertained that Yoruba may not have a common voice when issues of national interest arises.  Aluko toes this line of reasoning. “This is not in the best interest of Yoruba. Who champions our cause whenever there is an issue to be discussed. Gone were the days when Afenifere would speak and the whole country would shiver. If there’s disagreement within the group, it should not lead to factionlisation of the group but all should come to the round table to settle the issue; You don’t throw the baby with the bath water, Yoruba must work together to make Nigeria work; It is over ambition that is killing the race,” he said.

The count down to February presidential election has begun and Yoruba is going into it as a divided group. It is nothing but a story of clapping with one hand.