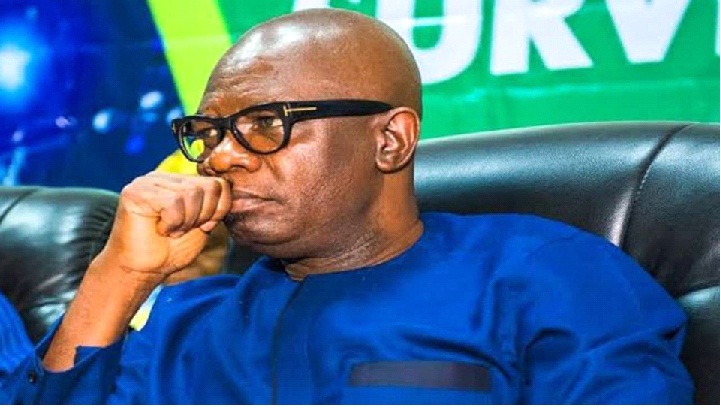 The Ondo State Deputy Governor, Mr. Agboola Ajayi who recently defected from the ruling All Progressives Congress, APC, to the People’s Democratic Party, PDP, has been described as a paper-weight .
The State Youth Leader of the APC, Mr. Babalayo Olutayo who stated this during a radio programme in the state posited that the development would not prevent the APC from winning the October 10 governorship election.
He said that Ajayi was not among the party’s bigwigs as referred to by the opposition, noting that his defection would not affect the chances of the party in the forthcoming election.
Ajayi, according to him, was an opportunist who was given the party’s deputy ticket in 2016 due to a conflict during the party’s primary.
Olutayo, who noted that Ajayi would not have been the deputy governor if not for the conflict ,said he was a PDP member that harvested where he did not sow.
To him, ” He is not a bigwig of the party ,because he harvested where he did not sow.
“He had no impact in the party. The issue of Agboola Ajayi is irrelevant and it is just like a removed feather from an hen that has no effect.
The youth leader affirmed that the large number of aspirants that obtained nomination and interest forms for the governorship position on the platform of the party is an indication of the party’s presence and bright chances to win and rule for another four years in office.
He added that it was equitably justified to let the Northern Senatorial District of the state to rule for eight years in the governorship post before the turn of the southerners, explaining that the Central has had two terms as governor in the state.
He, however, urged parties’ members to eschew violence and see politics as means of serving people.