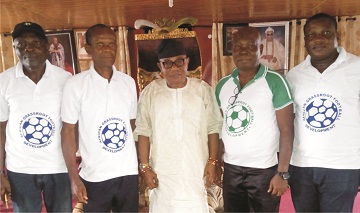 By Femi Atolagbe
|
Ahead of Buhari/ Osibajo national under 15 football competition, the African Grassroot Football Development (AGFD) has nominated and honor the Imperial Majesty  Deji of Akure Kingdom, Oba Ogunlade Aladetoyinbo Aladelusi Odundun 11 as the Royal Grand Patron of the organisation.

AGFD is an association of ex- footballers and administrators within and outside the state with the aim of developing the round leather game from the grassroots.

The president of the organisation, Prince Moruf Adams while presenting the nomination letter to the Deji of Akure in his palace revealed that the  inability of the African countries to nursery football from the scratch, which he said was responsible for the  woefully outing of the African continents at the world football competitions.

Moruf, who was represented by the association’s Director of competition, Mr Moses Fadoju  revealed further  that having discovered that the Africa football needed to be developed from the grassroot, hence the coming together of the professionals to salvage the situation .

He said; “the organisation had few weeks ago got the nods of the Ondo state Ministry of Youth and Sports Development to go ahead with their objective of developing football at the grassroots.

“While Federal Ministry of Youth and Sports Development, Presidency had also given us the go ahead to organise the Buhari/ Osibajo national under -15 football competition  which will hold between January and February 2020.

While responding, the Deji of Akure Kingdom Oba Ogunlade Aladetoyinbo Aladelusi Odundun 11 thanked and commended the organisation for their foresight in developing football at the grassroots and honor done on him as the Royal Grand Patron of the body.

The Deji of Akure added that sports is the best way to engage our youths  meaningfully and take them away from social vices.

The monarch added that our fire brigade approach is doing harm to football in Nigeria and in Africa at large.

“I gladly accept the honor and don’t envisage to call on me whenever you want me to participate in any of your activities.”