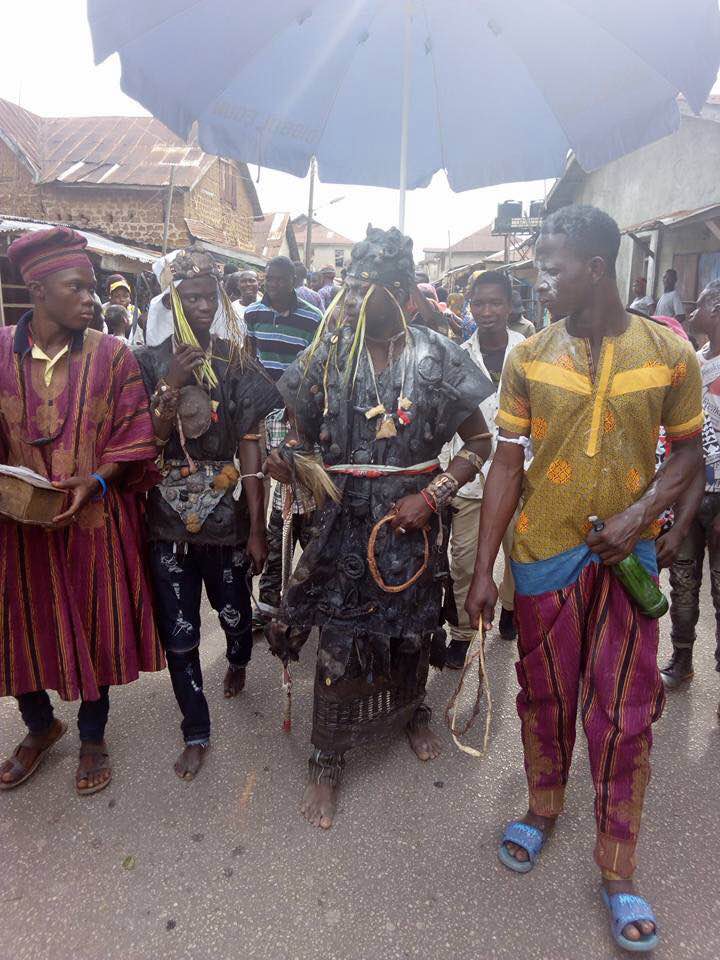 By Victor Akinkuolie
|
Agheregbe, Alegho and Ogun festivals are  some of the over fourty-four traditional festivals that are widely  celebrated in Ondo kingdom in view of the traditional rites associated with them.

However, the celebrations of the three festivals within five days have marked them out over the years as the best celebrated among  other traditional festivals in the town and have brought Ondo town into prominence among other town in the south-west part of the country.

Ogun festival which is the most popular traditional festival among all traditional festivals in the town is celebrated in honour of a deity believed to be the god of iron. As a result of the celebration, blacksmiths, drivers, artisans, farmers, market women and  all those involved in metal objects fabrication normally celebrate it with pomp, grandeur and fanfare.

However, the celebration of Ogun festival has different meanings to different people. To the worshippers, particularly those who have strong attachment to Ogun, the period is usually dedicated for spiritual appeasement to the deity by offering sacrifices at designated traditional spots and shrines within the town.

The sacrifices would involve the slaughtering of dogs at a popular Ogun shrine located at Odojomu street in the town,  while palmwine, native kolanut and roasted yam would be placed at the shrine which would be decorated with palm fronds which is believed to be Ogun’s costume.

However, to the second group of people, particularly the youth, the celebration of Agheregbe, Alegho and Ogun festivals  are not only observed as a period of carrying out spiritual activities, but one of the avenues of making fun and celebration.

Hence, on the day of Ogun festival, indigenes of the town, home and abroad who have returned home for the celebration would on the day appear in their best dresses to watch the festival in places such as Odotu, Enu-owa, Odojomu, Shora, Oke-Ayadi, Ogbonkowo, Legiri and Ogbontuntun which are in the centre of the city.

The celebration which attracts  people of all ages is a delight to watch as celebrants will paint their faces with charcoal, black engine oil, white powder and blue colour to represent the fierceness of Ogun. They would move close to their friends where they will be presented with cash after a bit of threat to “wet” them with the blue or the engine oil.

The fun will continue as traditional dancers would entertain spectators. During the celebration, the traditional ruler of Ondo kingdom,  the Osemawe and some notable traditional chiefs particularly the Egbedi and Ayadi normally play very significant roles. The period preceding its celebration normally starts with its announcement date called the “The Idijo Odun Ogun” in local parlance. This colourful ceremony  is usually held at a quadrangle within the vicinity of the Osemawe palace.

On the date of the event, traditional chiefs from various quarters in Ondo and heads of communities that have traditional and historical link with the town and are under the authority of the Osemawe who are called ” Olojas,” would converge at the venue.

Similarly, market women and the “Opoji’s” the women Chiefs would also in their best traditional attires converge in a procession  at the venue of the short celebration to add glamour to the event.

The colourful ceremony which usually kicks off in the evening at about 4:pm has a lot of side attractions. The chiefs, apart from dressing in different costumes of traditional Aso-oke, they would also wear caps designating their titles. They would dance to the venue of the ceremony accompanied by drummers and singers while spectators would share in the excitement by dancing and singing.

However, the most spectacular scene during the celebration occurs when senior chiefs called “Eghares” in local parlance arrive at the venue of the ceremony. The Eghare who are six in number, Lisa, Jomu, Odunwo, Sasere, Adaja and Odofin would announce their arrival individually with the sound of a special drum called “Ugbaji” exclusively made for them.

Of the six high chiefs, the two whose presence would make a difference are High Chiefs Lisa and Jomu. What marks them out are the fascinations they would introduce into the ceremony. First, they would upon their arrival few metres to the venue of the ceremony stand momentarily while their drummers would continue to entertain  spectators.

They would remain in that position until the Osemawe arrives at the quadrangle, venue of the idijo ceremony. The arrival of the Osemawe would be heralded with blowing of trumpet, drumming, singing and dancing. As the traditional ruler moves towards the venue, the leader of his drummers would change the tune of the drum intermittently, while the spectators including all the chiefs, Olojas and Baales present at the venue would rise on their feet to pay obeisance with the shout of “Abaiye “renting the air.

As the kabiyesi takes a special seat made for him, High Chiefs, Lisa and Jomu would dance towards the venue of the celebration in a Zig-Zag movement. As soon as they enter the venue, they would stop intermittently and with a clenched hand, they would point towards the Osemawe, pay obeisance and pray for him. They would do this three times before they finally take their exit by going to sit at  the special seats designed for them.

Consequently, the Idijo ceremony starts with the performance of traditional rites by the Odunwo. As soon as the rites are  completed, another Chief, Eseja would come forward and perform another rite.

At the completion of this, Chief Sagwe would come forward with a ruler like object in his hand and he would stand to recite the names of all the past and the incumbent Osemawe in order of their reigns.

At the end of this brief activity, the leader of the king’s drummers would move towards the Osemawe with his talking drum. He would place it in his palms and pray for him. Subsequently, he would recite the names of all past and the incumbent Osemawe. In return, the Osemawe would present gifts to him.

As soon as this process is completed, all the six high chiefs would gather together at a spot  at the venue of the idijo ceremony for a brief consultation while spectators await the outcome of their deliberation. High Chief Jomu would later come to the centre of the venue of the idijo ceremony; he would greet the Osemawe and the people and announce the date of the festival. The announcement would spark would  jubilation and dancing.

The Osemawe and the high chiefs as well as others would later leave for their different homes. However, the Osemawe would retire into the palace for the continuation of other rites to be performed by Chief Ayadi.

The activities for the festival which usually hold for nine days from the date of the idijo followed by the performance of rites by Chief Egbedi. The rites would take place six days after the announcement of the Ogun day ceremony. These activities would also be followed  by another important activity called “Mogunboko” meaning inviting Ogun from the forest.

This traditional ceremony is the exclusive function of the chief Egbedi and it is meant to herald the beginning of Ogun festival proper. The Egbedi would go round the town in company of traditional drummers.

As part of the glamour associated with the festival, two special gongs joined at the tail with a chain called ” Lahalogho” in local parlance would be heard all over the town while the indigenes who are versed in Ogun history would chant his praise.

This activity which is called ” Kiki ogun” would always attract gifts in form of cash and native kola presentation. Similarly, those who are proficient in the blowing of locally made flute called “Upe” would be applauded and in return get rewarded with crisps of naira notes pasted on their foreheads.

However, one of the most significant activities that also mark Ogun festival out of others in Ondo town is the eating of pounded yam popularly called ” Iyan Ogun” in Ondo parlance, which is prepared specially with delicious okro soup spiced with local condiments.

This age-long traditional practice and the practice of using dog for sacrifice during Ogun festival for which the Ondos are erroneously referred to as ” Ondo Ajaja” were meant to show the strong  attachment the people of the town has towards Ogun who is said to have assisted the people of the town in the time of their needs. particularly in the olden days when the town was said to have  been invaded by warriors from other towns.