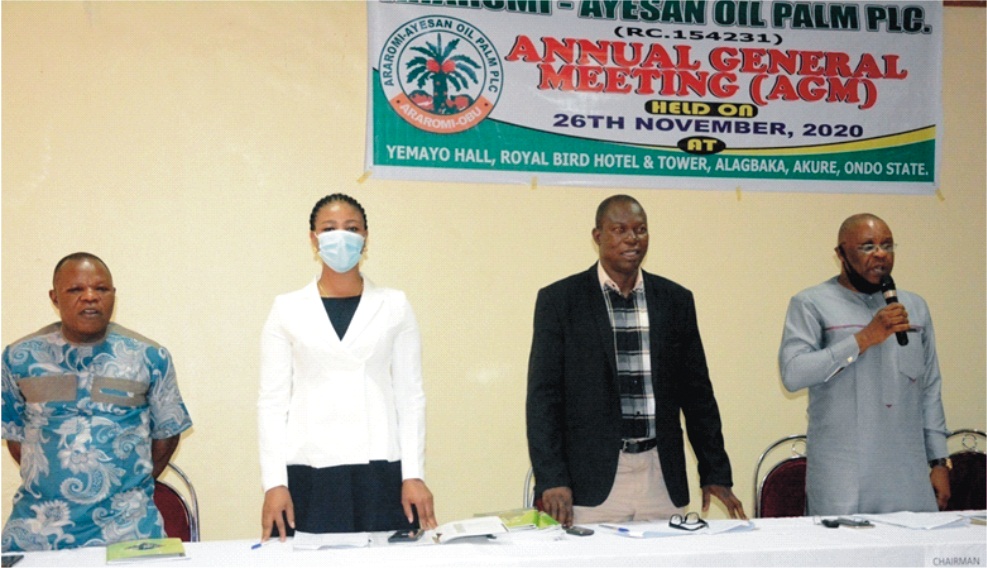 It was indeed a smiling time for the shareholders, Management and Directors of Araromi-Ayesan Oil Palm Plc. as the company presented its reports and accounts for the 2018 and 2019 business years at its Annual General Meeting held in Akure.
The company, despite the epileptic economic condition in Nigeria, achieved an annual growth rate of 1.93% and 2.27% in 2018 and 2019 respectively.
The company also recorded a revenue of N436.78 million and N334.28million at the close of 2018 and 2019 respectively, with gross profits of N186.17million and N123.76 million at the close of the two business years.
The shortfall in profit experienced in 2019, according to the Chairman, Prince Adetola Adedeji, was due the harsh climatic condition experienced during the year.
He revealed that the company was initiating some measures to generate sustainable long-term growth to drive shareholders return.
Prince Adedeji further revealed that “no dividends had been proposed by the Board of Directors as much Resources would be committed to the expansion of the company’s plantations and other operations”.
Defending the external audit committee reports on the two financial years, the Chairman Audit Committee, Sir Rufus Falana said the external audit reports were in accordance with legal requirements, saying the scope and planning of the audit were satisfactory.
Some of the shareholders, who commented on the reports, expressed satisfaction with the management board of the company, describing the financial reports as transparent and credible.
According to Mr. Adebayo Williams, the reports had shown that the company was growing and there were improvements, applauding the performance of the Directors as highly commendable.
In the ordinary business session, the motions to reelect Directors, fix remuneration of Directors, reappoint independent auditors, authorise Directors to fix the remuneration of Auditors and elect members of the Audit Committee were unanimously approved by the shareholders.
While speaking with The Hope, the Chairman, Prince Adedeji disclosed that the company had no magic wand to its success other than commitment, hardwork and excellence on the part of the management and the board.
On strategies being put in place to ensure sustainable growth, he said, “We will try as much as possible to cut cost and we are at the brink of acquiring 10, 000 hectres of land from the state government on this.
“This is not a promise anyway that in the next two years there will be a magic wand since you also understand that it is a long time investment.
Commenting on the annual reports, the Ondo state representative in the Board of the company, Dr Alonge Adeola Richard said Araromi-Ayesan Oil Palm Plc. had experienced positive growth.
“In the past, it was not like this. The books of the company had been in the red but with the effort of the investors, company and board members, we are able to move the company from negative to positive.
“So, what we declared today is a profit for the company rather than and we hope that in the next one year, we will move forward”, he stated.