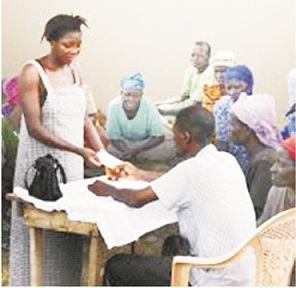 By Maria Famakinwa
|
When micro-credit organisations that have affiliations with micro finance bank were set up years ago, business men and women Jumped for joy as they embraced such long awaited opportunity to boost their businesses.

Little did they know that some of these micro-credit loans were established by entrepreneurs whose main aim is to make profits while capitalising on the economic hardship in the country. Findings by The Hope revealed that most of these borrowers, mostly petty traders and artisans constantly suffer palpitations as they strive to make their payment in weekly instalments. Failure in which they will either be locked up in toilets, arrested, force the women to place their breasts on lantern, forced them to beg passers-by for money, sell their property to recoup the loan among other harrowing experiences experienced which most of the victims described as in human treatments as they narrated their ordeals to The Hope.

A middle age woman, who simply gave her name as Iya-Ibeji explained that she was introduced to one of the popular micro-credit loans by her friend and she followed her to the meeting where she was given a form to fill. “I accepted my friends’ advice because I needed money to resuscitate my kerosene business. After filling the form, I paid for registration and was asked to save 10 per cent of the amount I intended to borrow after which the money was given to me.  I was given N20,000 which I am to start paying the week that followed. I collected the loan and started repayment after a week even when I was yet to get profit from the business I used the money for.

“I was faithful in the repayment of the first loan I collected and I applied for the second loan. Not quite long after that, I took ill and I used part of the money to take care of myself which affected my weekly returns. I went to the meeting and pleaded with the officer in charge to give me time so as to pay up but disagreed. The next day, I was at home when they came to arrest me. They took me to their office and locked me up in a toilet together with other defaulters before my family came to my rescue and I was released. It was a sad experience for me.”

The experience of Iya Oge, a tomato seller is similar to that of Iya Ibeji who said that she regretted the day she collected N50,000 loan from a micro-credit organization as she described it as unforgettable experience. “I took the money with the intention to boost my business but I cannot explain what I used the money for that made weekly repayment difficult for me. I started running around with the hope of getting the money to no avail, before you know what was happening, I developed high blood pressure. What actually made the situation worse was that the time I  collected the money was the period of tomato scarcity and I used the money to buy tomatoes with the hope that I could make profit but it turned otherwise yet, those in charge of the loan threatened to lock me up.

“When my high blood pressure defied all medications, the medical doctor who attended to me counseled me against thinking and I opened up to him my predicament. He then appealed to my husband who opposed the idea of collecting the loan initially to look for the money so as to safe my life. My husband paid the money.  Since last year, my health situation has not improved.”

When asked if it is true that some defauters who are women were forced to place their breasts on lanterns said it was true and that  made her to develop high blood pressure. “Before I  collected the loan, I was warned that they could used any means to get their money. There was a case of a woman who could not pay up her debt and was dodging to evade arrest but heard that someone was asking for somebody in her compound, she thought they came for her, she started running and was hit by an “okada” that broke one of her legs. She was in the hospital bed when those in charge of the loan she collected went to look for means of paying the money she collected.

That aggravated her health condition but thank God for people around who contributed the money for her the second time the loan officials came to the hospital where she was addimitted shouting at her to find means of paying the money.  The woman on sick bed explained to those around that it was the thought of repaying the N15,200 loan that made her to be hit by an ‘okada’ when running to safety thinking they came for her. The people there contributed N10,000 and the woman’s family added the balance. Those officials do not have human sympathy at all, if you are sick or in a coma, you must pay the money you collected. That is what matter to them.”

An artisan, Mr Saliu Alowonle who revealed that hard times forced many petty traders into taking micro credit loans appealed to government at all levels to find a lasting solution to the ailing economy to improve standard of living across the state as he narrated what his wife in Kwara state went through before she could pay the micro-credit loan she collected.”My wife went against my advice and took the loan but when she could no longer continue with the loan repayment, she was arrested and maltreated before her family called me to  assist.

“What was surprising was that my wife could not account for the N50,000 collected. She resulted into selling her property at give away prices to pay N23,000 out of the loan collected but when she had nothing valuable to sell again, she was arrested and locked up in a guard room they already prepared for defaulters aside rainy curses on her. I met with some friends who assisted me to pay the remaining balance, she learnt her lesson in a bitter way. What made me to be sceptical about the loan was that a pregnant  woman in our street in Kwara state who also collected N20,000 but left with N6000 to balance up was not spared. They came asking for her but was not around, the loan collectors started raining curses on her that she would not deliver safely.  This infuriated the woman’s landlord who immediately paid the N6000. I will advise traders to avoid collecting loans that unsettled them because nothing good can come out of such loan.”

A commercial motorcyclist who gave his name as Mr Omowanle is also struggling how to pay N150,000 agric loan he collected from micro-credit organization as he narrated his plight”I collected N150,000 agric loan late last year for the purpose of planting tomatoes and cucumbers, there was no problem initially as I was able to pay N21,900 monthly repayment for four months before cows destroyed my farm. The ‘okada’ I was also using for commercial purpose to repay the loan was also impounded by the police. Since then, I have been making frantic efforts to repay the remaining seven months loan because it is a binding agreement and I do not want to be tortured.”

Speaking differently, a trader, Mrs Alimotu Bankole who sells second-hand clothes said that micro-credit loan is a sure way to grow ones business if the money is used for the reason it was meant for. “I am happy with the loan. Those who could not repay were diverting the money for something else. The money is meant  for investment which is clearly indicated in the expression of interest form but most people after collecting the loan used it for house rent, school fees, burial, marriage among others thus making it difficult for them to repay the loan. We have many petty traders who through the loan are living fine. It is only those who are not sincere with the loan repayment keep complaining.”

One of the micro finance branch managers in Akure who does not want her name in print explained that clients across the country always term any micro credit bank as LAPO because it is the most popular one as she denied any form of maltreatment of their clients. “Before we give out loan to anybody, we read out the terms of agreement for them and they sign to show their approval. We go as far as knowing what they will use the loan for and give necessary counsel yet, most of them after getting the loan divert it to another thing which affect their weekly returns.

The minimum amount we give to client is N50,000 and give them two weeks before they start paying the loan. The money they pay a week after collecting the loan is saving. For instance, if a client collects N50,000, the person is expected to bring N2,500 two weeks after which will now be on weekly basis. Out of the N2,500, N2000 is for the loan repayment while the N500 goes into their savings yet, most of them default.”

On if they place clients (females) breast on lantern or lock them up in toilets denied the allegations and said, “we do not maltreat our clients who default but negotiate with them and agree on how to pay the money. We are facing a lot of challenges because most clients are not sincere. Some of them after collecting the money relocate. There was a particular case of a client who relocated after collecting the money and we could not trace the guarantor either, I was forced to pay the money. Our clients enjoy many packages that staff are not benefitting yet those who mismanaged the loan claimed that it is blood money despite the fact that we issued them cheques. We also write off debts of clients who died. Why are they not telling people about the benefits but bent on destroying the organisation set up to help them financially?

“The truth is that many are not sincere when it comes to the issue of money so, we are not bordered about what they say because if we fail to stand our ground since 10 years we started in Ondo state, insincerity of most clients would have closed down the organization.”