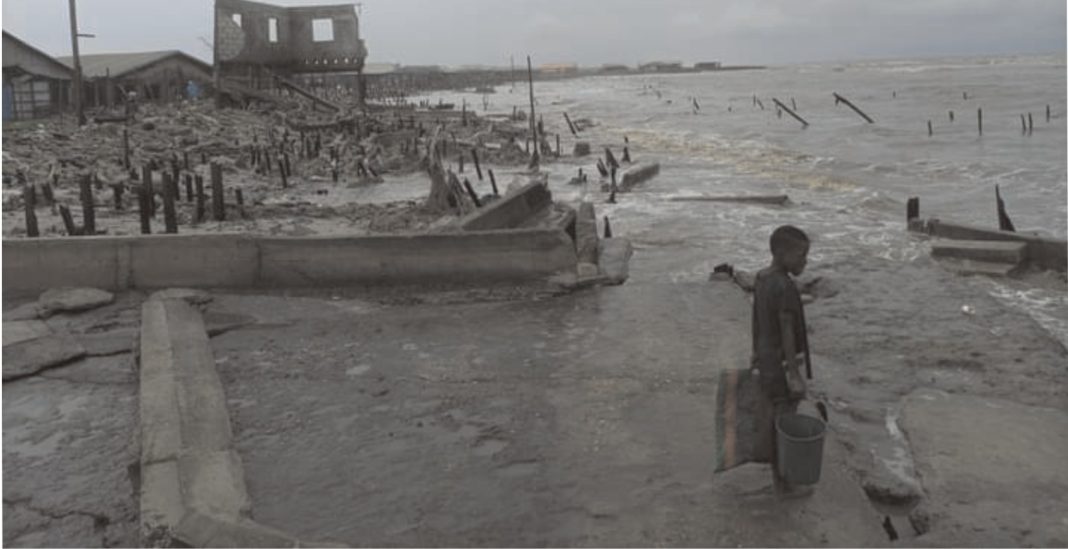 With a history of Communism in West Africa, the Ayetoro community cannot boast of its name, “The Happy city,” as 95% of its landmass has been lost to the Atlantic Ocean that flanks it by the East. Residents flee as education, health, business, and social lives have crumbled. The Hope brings a report on the unending woes of Ayeotoro community in Ilaje Local Government of Ondo State.

The first sight that greets any visitor to the community will be that of ruins, dirt, and the terrible feeling that comes with this sight cannot be hidden.

The carcass of the one-time profound technical school by the right-hand side and the condemned community power-generating house at the right will elicit pity.

The one-time community town hall that used to be one of the long-standing significant buildings in the community is now a shadow of itself.

Another terrible thing the sea does, beside houses, landmass and significant structures in the town, is the importation of dirt.

At almost every angle of the community, especially the seaside, the enormous amount of dirt available is enough to declare a health emergency within the community.

Known for its fishing and water transportation businesses, nothing could be said of those trades at the moment. Shops and business units have been washed away along with other buildings. Fishing tools  and boats have also gone.

Many of the residents have left to find means of survival elsewhere. As of 2019, about 21,000 residents (out of 26, 000 recorded from  the 2006 census) had fled the community when 75% of the community landmass had gone down the sea. What is left of the community now are those who still believe there is some  hope of saving the riverine community.

We gathered that the community suffered a quantum loss of about N200 billion.

Mrs Ibironke Saehi, who trades in foodstuff and other consumable goods, said she had lost her goods, shop, and house. The prices of sea products, which people could give out for free weeks back, have become unaffordable for some of them because the prices have gone up.

Mrs Ayo Balogun, a fish trader told The Hope that the price of fish had soared because fishermen could not go to the sea due to the large volume of water.

Mr Goodluck Ejagbomo, a businessman and a transporter, said his business had been drastically affected and his house destroyed. He said he had taken his family out of the community for a new life elsewhere.

The once vibrant technical school that produced notable engineers lies in ruins. Its remains was in 2019, used by the primary school for the pupils to have a roof over their heads, but it has now become inhabitable, let alone conducive for teaching and learning.

Regarding water facilities, the people get water from a tap that runs across the community, but some taps are almost submerged in muddy water. To draw water from the remaining pipes, the residents must compete with dirt to have space to put their buckets.

What is left of the Ayetoro is the irony of its name, “Happy City.” A visit to the community shows no happiness but agony, trauma and frustration.

Giving an account of their ordeals, the community’s spokesperson, Prince Victor Akinluwa, could not hold back his pains and frustrations in an exclusive interview with The Hope.

“The devastation happens every day. The sea incursion is a great menace to Ayetoro. It has affected our landscape. Houses are being lost to the sea, fishing tools have been lost to the sea, and the people are significantly affected.

“Ayetoro has lost a lot of landscape to the sea. The sea side that contained about 500 houses has now been washed away. People now live in uncomfortable situations because a house that contained five people before now accommodates about 50 people as a result of the present situation”, he lamented.

Akinluwa added that aside from other damage, children in the community could not go to school as the sea continually destroy both primary and secondary schools.

“We do not have schools anymore, the base of the primary and secondary schools has been shifted about five times inward; the students are suffering”, the community spokesperson stressed.

He decried government’s lack of attention and the community’s likelihood of perishing under the sea.

His appeal; “We want the government to please look into the situation so that Ayetoro can be rescued. Ayetoro must not go into extinction; it is a town with history in Ondo state and also a tourist attraction in Nigeria.”

“And what the press can do is to help us air our plight so that government and spirited individuals can be encouraged to come to our rescue.”

Also speaking, one of the youths in the community, Emmanuel Aralu, lamented that virtually every aspect of the community had been destroyed.

His account, “The situation of things in Ayetoro right now is unbearable. Every one of us is hopeless and helpless.  We sleep and wake up with the ocean destroying our property and it has risen to an unbearable level.

“The level of damage done by the sea incursion in Ayetoro community to both life and property cannot be estimated, but with a rough estimate, the level of damage done is almost 90-95% including landscape, property and life generally because virtually every area of our life has been affected socially, economically and even spiritually.

“The structures that the sea incursion has destroyed are enormous. If we begin to count, we can count from today till the next day without stopping.

“Then we have the glass house, that’s the information house where the elders and the supreme council of elders sit and meet to share all the information of the community,  have been washed away also, and many other things like the library has also gone, many more we can’t estimate in one second or in a statement that the sea incursion has destroyed”.

Giving the initial landmass of the community before the sea submerged it, he said Ayetoro was about 3km away from the sea shoreline.

He explained further that there used to be the main street that divided the community into the northern and southern parts, adding that one part had been destroyed and the other one on the verge of being submerged.

“As I mentioned, people’s lives have been affected; healthwise, economic wise and social life. An average man who stays in Ayetoro has turned to someone who does a series of blood pressure checks. People now go to the hospital often to check their blood pressure due to this issue.

“For instance, a man that built his house in the early ’50s, and within a twinkle of an eye as a result of the reoccurring problem in this society, his house is destroyed. Where would such a person start? If care is not taken, one can faint from the shock and, in the process, even lose his life. Cases like this have been recorded.

“This environment is not safe for anybody to live in. We cannot live a healthy life in this community due to the amount of dirt that comes from the current issue we are facing.

“We don’t even know where the dirt comes from, and they are hazardous to our health, especially to the health of the young ones, with cholera taking the lead.”

Aralu told The Hope that despite several letters and outcry to the government and relevant stakeholders, there seemed not to be help coming from any quarter anytime soon.

“Over the years, we have been crying for authorities in concern to come to our rescue; we have sent letters and attended press conferences because the living condition here is deplorable, and we are still pleading that the local, state or federal government should come to our aid because the life we are living here does not befit anyone. We vote and participate in all our civic responsibilities, and we don’t see any reason we should be left unattended.

“So, such a community that has a story like this shouldn’t be left to their fate. So that is the reason why up to this moment I am speaking to you right now, all of the residents in the community are still crying and begging the authorities concerned and everybody that feels that the community should not go into extinction to please come to our aid in helping and assisting us out of this our menace”.

Ayetoro was established as a utopian Christian settlement of the Nigerian Holy Apostles’ Community on January 12, 1947. The community became one of the most substantial towns in the present Ilaje local government, with an estimated population of 14,000 in the 1991 Nigerian census, which increased to 26,000 in 2006. The ruler of the religious community took their mode of worship, and Christian practice from the white garment Cherubim and Seraphim (Aladura), headed by a King referred to as the Ogeloyinbo of Ayetoro and His Spiritual Majesty of Holy Apostles Church, Ayetoro Worldwide. The community is known for its communist system of living in West Africa.

The genesis of the Nightmare

The community leaders and residents confirmed that as oil exploration on the sea continues, the water level rises, leading to the unending incursion. They lamented that despite the economic benefits derived from the exploration, the community was never considered.

The Hope gathered that as the sea incursion persisted, the community leaders cried to the government at all levels in Nigeria for intervention and the need for a barrier. In 2004, the Niger Delta Development Commission (NDDC) awarded a Shoreline Protection contract to Gallet Nigeria Limited at the sum of N2.4billion to construct a defence on the river bank for the community against the threatening ocean surges.

Troubled by the continuous destruction of the community and its nearness to extinction, Governor Oluwarotimi Akeredolu appealed to the Federal Government to save the community. The governor also approached the World Bank to find a lasting solution to the problem, and approval was given. This led to the intervention of the Nigeria Erosion and Watershed Management Project, NEWMAP, and Etteh Aro & Partners was engaged.