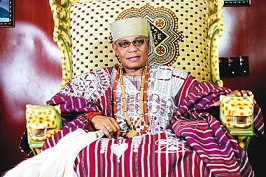 By Adekola Afolabi
|
The Deji of Akure Kingdom, Oba Ogunlade Aladetoyinbo, has directed the closure of markets,  shops and stalls in Akure today to give way to the celebration of the annual Aheregbe festival in the state capital.

According to a statement from the Palace and signed by the Deji’s Chief Press Secretary, Adeyeye Michael, said the festival also known as “Dududu” would be celebrated  during which no market, shop and stall would be opened for business transaction.

The statement equally added that another festival called Omojao would also hold on Thursday August 29, 2019 during which markets, shops and stalls would be closed.

“In line with tradition, all markets, shops and stalls in Akure will be closed on 14th and 29th August, 2019 to observe the festival,” the statement added.

It, however, stressed that the two festivals will not in anyway restrict human and vehicular movements.

“All owners of shops, stalls and markets places in Akure are enjoined to comply with the directives by locking their shops, market places and stalls during these periods,” it added.