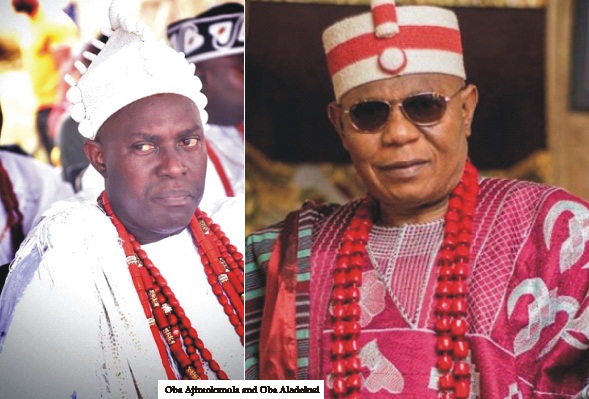 There seems to be a royal rumble in Akure the Ondo State capital over the celebration of the Aheregbe festival which commences today.

Aheregbe is an annual festival in which all markets, shops, stalls are under lock and key.

The closure of the markets appeared to have pitched the Deji of Akure, Oba Aladetoyinbo Aladelusi Ogunlade against the Iralepo of Isikan, Oba Oluwagbemiga Ojo.

Deji in a statement in commemoration of the annual festival ordered the closure of all markets in the metropolis.

According to  the Chief Press Secretary to the monarch, Michael Adeyeye, the closure became necessary as part of the age-long tradition in observance of the annual festival.

He informed residents that no trading or opening of shops under any guise will be allowed during the festival.

The palace urged market women and shop owners to comply with the directive.

The statement, however. clarified that only Pharmacy shops and Patent Medicine Stores will be allowed to open during the festival.

In a statement he personally signed, the Iralepo who said it is a taboo to bring such a festival to Isinkan and that celebration of such in the community would have grave consequences.

While saying though Akure and Isinkan have what some may consider blurred boundaries, the monarch said indigenes of the two communities know that their boundaries are not blurred.

While saying security agencies have been informed about the development, Oba Olofin-Adimula enjoined all market women and traders on Isinkan land to go about their lawful businesses.

He equally enjoined the youths in the community to remain calm.

Also, the Elemo of Isinkan, High Chief Olasehinde Abidakun while providing clarification explained that Isinkan community is not and has never been part of the Aheregbe festival celebration of the people of Akure or any other such celebration.