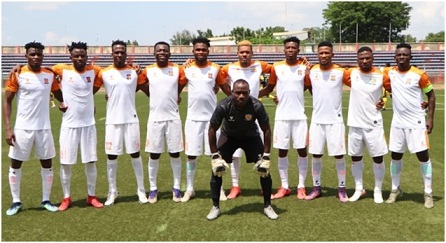 Chigozie Chilekwu shone as Sunshine Stars eased into the AITEO Cup round of 16, making light work of Rovers FC at the Aper Aku Stadium in Makurdi.

Sunshine Stars showed class from the get-go, nevertheless the first chance of the game fell to Rovers who were denied at goal mouth by David Ariyo after 10 minutes of play.

Five minutes later Leonard Ugochukwu was at the end of a sweeping team move, but could not troubled the goalkeeper with a tame effort at point blank.

Chilekwu grabbed the opener from the spot 25 minutes into the game, after the Calabar based side got penalised for a handball in the area.

Three minutes later Ikenna Cooper made it 2-0 for the Owena Whales, finishing off from Leonard Ugochukwu’s pass, however Rovers halve the deficit against the run of play at the stroke of half-time through Zuzu Benjamin.

11 minutes into the second half, substitute, Samson Olasuopo pounced on Michael Olalusi’s through ball to restore Sunshine Stars’ two-goal cushion.

Then Ariyo was on hand to deny the NNL campaigners a route back in the 58th minute, before Chilekwu completed his brace and extended the lead with a close range finish from Chinedu Ozor’s free kick four minutes later.

Chilekwu turned provider in the 90th minute by setting up Ozor who rounded up scoring for the Emmanuel Deutcsh tinkered boys with a smashing goal to close the game 5-1 for the Akure landlords.

Sunshine Stars will battle Katsina United at the Area Three Old Parade Ground, Abuja on Sunday for a place in the quarterfinals.