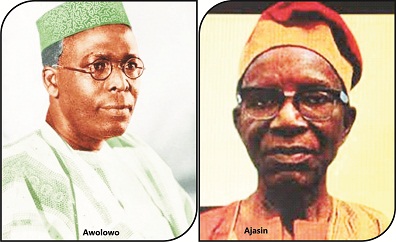 Ajasin/Awo, two of a kind on free education

By Ayodele Fagbohun
|
“Involvement in politics was never part of my ambition. All that I aimed to achieve in my life was to become a university graduate and a school proprietor. Even though I was not uninterested in public affairs especially those directly affecting my Owo community”

If Chief Michael Adekunle Ajasin had chosen permanently to remain aloof from partisan politics in the early 1950, he would have been contented only as a university degree holder and probably a school proprietor which is the pinnacle of his professional calling.

However, due to the inscrutable hands of destiny or fate and mainly predilection for public and community works, Obafemi Awolowo, a budding agile politician, moving spirit and roaring engine of nascent Yoruba politics from Ibadan was an august visitor at Imade College where Ajasin was school principal to discuss and explain extempore the need for a political party and that only people like him should be involved.

Ever since the eventful journey of Chief Awolowo all the way from Oke Bola street in Ibadan to meet with Chief Ajasin at Imade College compound in Owo, things have been taking shape in upward swing in the birth of meaningful progressive and development politics to the total liberation emancipation of the people from colonial tutelage, disease, poverty and ignorance.

Ajasin/Awolowo were like Siamese twins; embodiment of spartan self discipline in all its ramifications, frugality, industry, diligence, humility shrewd management of human and material resources, integrity and probity which no politician living or dead in Nigeria, in the entire black race could neither muster nor match let alone excel in strict planning and efficient execution of populist programmes designed for the greatest number of the population in a given milieu.

While paying glowing tribute on the evergreen memories of Awolowo/Ajasin, the governor of Kaduna State up North, Mallam Nasir el-Rufai attributed the high quality human capital in the South-West, Edo/Delta inclusive to the foresight of these two foremost and frontline politicians in aggressively implementing the free education programmes.

El-Rufai made this observation in Akure in a keynote address at a colloquium organised by the Ajasin Foundation to commemorate the 116th post-humous birthday anniversary of the former governor.

He said both Awolowo and Ajasin deserved commendation for the ingenious and pragmatic education policy which had improved the fortunes of people of the then Western Region from the present Lagos to Asaba in Delta State.

The theme of 2019 colloquium: Promoting the Economic Development, Social Justice and Rule of Law as Pathways to Stability, Peace and Prosperity in Nigeria vis-à-vis, the present challenge and problems of nationhood confronting the country. These are very pertinent and germane to the totality of the personal struggle and purpose of Chief Adekunle Ajasin’s social and political mission while on this terrestrial plane.

Like his soul mate, Awo, Papa Ajasin was very ascetic, abstemious in food and a teetotaler who lived essentially and completely for God and humanity.

If our present generation of politicians and rulers can cultivate and truly imbibe one tenth of the personal qualities and conduct and character of Ajasin, the nation will be paradise on earth.

The pragmatic decision to float the Action Group ultimately yielded positive dividends and complete socio-political and cultural turn around for the Yoruba race in the colonial era, but without initial teething problems contemporary issues on party formation which poor attendance at meetings was the chiefest.

At a stage, there was despondency and despair to discontinue the meetings and disband the party outright on the reason that the people might not be politically conscious to appreciate the need for the party.

Like dues ex machine, it was the innate ability and sheer clairvoyance of Ajasin urging Awolowo to continue the meeting that: “It was not the beginning of a task that mattered, but the continuing of it until success was achieved”.

The next meeting of the party recorded a stupendous large turn-out that Ajasin was accorded the privilege to preside over the meeting, the first time Awolowo would vacate his seat for any member.

According to Awolowo, it was either the aura of Ajasin which attracted more people or a psychic power that influenced the minds of the intending members for the tremendous gathering for the subsequent meetings of the political party.

At this junction, the Macpherson Constitution of 1951 was in full swing into action giving fillip to autonomy by way of self government through the establishment of Regional Houses of Assembly and House of Chiefs.

The constitution was to create the position of leader of government business to be elected by the political party with majority of seats in the anticipated House of Assembly.

Events moved rapidly as time was no longer on the side of Action Group. The political party was quickly launched to escape being ruthlessly nipped in the bud and completely mopped up by the already established and monopolistic NCNC.

Having successfully launched Action Group, which took the nation by the storm preparatory to election. National Conference of the party was convened to prepare policy papers on various aspects of governance. The party would certainly agree upon in the policy papers for purposeful electioneering campaign if the party had to be taken seriously by the electorate.

Ajasin and one other member, Chief E. A. Babalola was billed or commissioned to work on education. There was deadline set for the submission of the policy papers.

Chief Ajasin not only beat the deadline, but singlehandedly prepared the policy papers on education whereas his partner, Babalola joyfully appended his signature being a very brilliant and well researched output.

The paper was unanimously adopted and approved by the party to be implemented on assumption of political administration of Western Region.

Ajasin made three key recommendations thus: The introduction and implementation of Free Universal Primary Education in the Western Region; the establishment of what I (Chief Ajasin) called Modern Schools and the establishment or Crush or Emergency Teacher Training Scheme.

Chief Ajasin had an advantage over his partner, Chief Babalola as he had just arrived from Great Britain on completion of Post Graduate Diploma in Education, the syllabus which included a course on Comparative Education.

Ajasin was familiar with the latest trends around the world at a time the second world war (World War II) between 1939 and 1945 had just ended.

Ajasin and his Action Group that formed the government of Western Region were prepared and actually introduced the education innovation and networks; kick-started unprecedented development and progress in the West for other sleepy regions to fully awake from their stupor, mental inertia; to follow suit and catch up with the rest of the civilized world.

The free education was not a mere populist, neither polemic nor gimmickry to hoodwink the gullible to vote. It was based on well known principle of “a sound mind in a sound body”.

Chief Obafemi Awolowo asserted as follows: “Man is the sole dynamic nature, and accordingly, every individual Nigeria constitutes the supreme economic potential which this country possesses.”

He went further to explain: “Other things being equal, the healthier the body of man and more educated his mind, the greater would be his moral and the more efficient and economical he would become as a producer and consumer.”

Awolowo drew the following quotations from the book, World Perspective in Education, written by Edmund J. King: Modern Japan has been made by education within the lifetime of the people still surviving. The Soviet Union’s Strength is based even more remarkably upon its educational system and has reached its present level within two generations of scholastic advance. The revolution in China is still too recent to justify prophecy, but without stargazing, we cannot fail tremendous technological and social upheaval going on there-all intricately bound up with educational reformation. The United States is ruthlessly analysing the merits and demerits of its colossal experiments with schooling.”

All this goes on, to imply, “education is a political instrument for bridging the gap between the rich and the poor and hence, for advancing the cause of democracy.”

It is unfortunate and disheartening that the legacy of Ajasin/Awolowo free education is presently considered and approached by the government with levity and observed in the breach rather than in total compliance.

It is the fundamental and immediate cause for the downward trends in every facet of our development across the country.

Any attempt to restrict education will deepen the chasm between the haves and the have nots. The end result is catastrophe. Nothing could be more dangerous than ignorance, indifference and ideological isolation. Education remains the only potent weapon and force to promote economic development, social justice, equity and the rule of law. Invest on it!