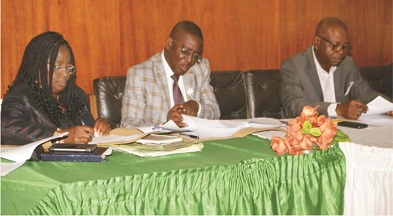 By Bukola Olamona
|
The Management of Adekunle Ajasin University, Akungba Akoko, Ondo State has donated office equipment to ease the take-off of the newly created Area Command of the Nigeria Police located at Iwaro-Oka Akoko.

The donated items include computers and printers, and it marked another step in the Corporate Social Responsibility of the University to the people and organisations in its immediate locality.

Speaking, the Vice Chancellor, Prof. Igbekele Ajibefun, said the donation was in response to the request of the Police to help in the smooth take-off of the station and its offices. He also said the University would continue to do its best within available resources to help institutions and groups.

He added that the gesture also builds on the existing cordial relationship between the University and the Police from the local station to the State Command and to the Zonal Command of the Force.

Prof. Ajibefun recalled that the creation of the Area Command a couple of months ago coincided with a student demonstration in the University.

He praised the timely response and matured way the Command reacted to ensure that the demonstration did not get out of hand and that there were no injuries or looting while it lasted.

In his response, the Area Commander, ACP Iluyemi Funso thanked the University Management for the donation, adding that the Command would continue to liaise with the University to ensure peaceful co-existence among members of the University and the host communities.

He said much is still needed to be done in ensuring the smooth take-off of the young Command, adding that efforts would still be intensified to ensure a conducive working environment for his men.