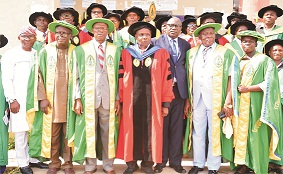 By Olusola Alatise
|
The role of a writer as an advocate, prophet,  freedom seeker and voice of the prople in enforcing Corporate Social Responsibility to the society in Nigeria  has been stressed.

Speaking on the theme “CORPORATE SOCIAL  (IR) RESPONSIBILITY: A LIT-COM PROGNOSIS OF NIGERIA EXPERIENCE, Ajimuda said writers have been using literature both fiction and non fiction to project the true situations on the ground to the public particularly, the marginalized rural communities in the country

He posited that government inability to enact legislation mandating CSR compliance in Nigeria has been the reasons for non implementation of it , particularly in the post colonial era.

He cited three literary works of Ahmed Yerima’s Kaffir’s Last Game,  Festus Iyayi’s Violence and Yerima Ahmed’s Hardground to show the level of contributions of writersin raising the consciousness of the people to happenings in their environment

The lecturer said writers had established the causes of violence resulting from the people to failure of every one including government  companies and the people in their social responsibility to manage most of the situation before it became crisis.

Ajimuda who described Corporate Social Responsibility as  a demonstration of certain responsible behaviour on the part of the individual,  the public and private (government and business ) sector towards the society and the environment submitted that most of the companies in Nigeria, particularly the Niger Delta region have failed woefully in this area.

He said selected stakeholders within the larger community have been benefiting what ought to have gone round the people which he said led to many crises experienced in the country in the recent times.

He commended Ondo State Governor,  Arakunrin Oluwarotimi Akeredolu for his intervention programmes in the education sector, especially in public primary schools in the state,  saying many of the schools have been rehabilitated or reconstructed and that work is ongoing in others.

“Though I am not someone who is prone to unnecessary praise singing and sycophancy, at this juncture,  I will like to commend Governor,  Akeredolu for his intervention  programmes in the education sector, especially in public primary schools in the state.

Many of these schools have been rehabilitated or reconstructed and work is still ongoing in some. Also, some interventions can be seen going on in the area of road rehabilitation and construction in  the state “

Ajimuda listed good perception from the human resources, public trust, reduction of litigations and peaceful co-existence among others as   gains of effective practice of Corporate Social Responsibility.

He suggested government legislations on CSR, inculcation of moral management style, embedding of CSR  into an organization management strategies, activism and demand for increased CSR activities,  the need for communities to involve in CSR decision making process and government step up in development efforts  as solutions to challenges of corporate social responsibility.