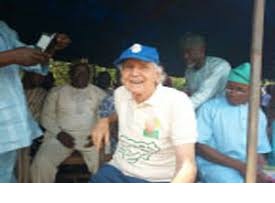 Gargiulo died in England, his hometown on Monday evening at the age of 87 years.

The white man left England for Igbobi College in Lagos in 1963 and later proceeded to Ajuwa Grammar School in 1971 to head the  then three year-old secondary school.

During his stewardship as the school’s Principal, Ajuwa Grammar School, which was battling for life rose back as one of the best in the area.

After his retirement from service, Gargiulo stayed back in Okeagbe and later came to live in Ugbe Akoko where he chose to embark on philanthropic gestures.

During his life time he assisted many in their education and businesses. He was never married.