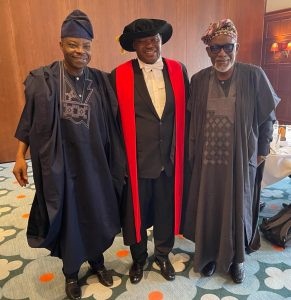 Chairman of the Southern Nigeria Governors’ Forum and Ondo State Governor, Oluwarotimi Akeredolu, has decried the spate of abandoned projects in Nigeria.

Governor Akeredolu said abandoning projects at this critical period in the economic life of the country is not cost-effective.

The Governor, who identified corruption, resource control, project goals, contractor selection and supervision as some of the major challenges behind abandoned projects, noted that a reasonable government must work towards achieving a successful completion of projects.

Akeredolu spoke at the First Business Doctorate Degree of the University of Cambridge Graduation Ceremony held at the University’s Arms Hotel, United Kingdom.

The Governor, who was a guest speaker, described Megaproject as an excellent accelerator if properly planned and executed.

He spoke on the topic: ”The Paradox Of Abandoned Megaprojects In Nigeria.”

Akeredolu said; ”The Ondo State Government, under our leadership, has completed several megaprojects. These projects exacted considerable pressure on the severely lean resources of the State. They have gobbled billions of Naira.

“While some have been completed and delivered, several others, some of which are complex, may take over five years or so to be completed. Our administration has continued to construct roads, bridges, among other infrastructures.

“We made a solemn pledge on assumption of office that we would complete all projects abandoned by our predecessors in office. We are not unaware of the acute paucity of funds for the execution of projects.

“We are, however, poised to fulfill our promise as best as the financial situation permits. We intend to complete all projects in the lifetime of our government. We do not intend to handover any abandoned project to our successor.

“Megaprojects, such as the Ore Bridge, provide the necessary support for government deliverables and economic transformation, which is readily discernible in our GDP. So, where it is properly planned and executed, megaproject is an excellent development accelerator.

“Given the resources such a project can take, abandoning projects at this critical period of our economic lives is not cost effective. The challenges are not only limited to developing countries as over £30 billion (British pounds) has been spent on the Cross-rail Project in England without completion. This is a terrible example of a project going bad in developed countries.

“Specific to Nigeria and as pointed out in the thesis, just three abandoned projects equal 60% of our national debt. The Lagos-Badagry Express Road, the Ajaokuta Steel Project, and the Subsidy Reinvestment and Empowerment Programme (SURE-P) Project. At all times, the Federal Government abandoned 60% of every project and the Nigeria National Library, where over N200 billion has been spent, is abandoned. The project is on the 5th floor of a 13-floor building project.

“The Federal Government has been on site for over 25 years without meaningful progress. Again, the megaproject takes around 10% of global GDP and over $9 trillion yearly. It is the case that Universities globally should rise to the challenges of acquiring and engaging new knowledge on megaprojects.”

The Governor also congratulated the Billionaire businessman, Jimoh Ibrahim, who obtained the Doctor of Business Degree of the University.

“I am told it is the first time the University of Cambridge will be awarding her first Doctor of Business Degree in the last over 800 years”, Governor Akeredolu said.

He noted that the incredible performance of Dr. Jimoh at the University of Cambridge comes with hard work and commitment to primary goals, adding that the business mogul has invested time in the institution.