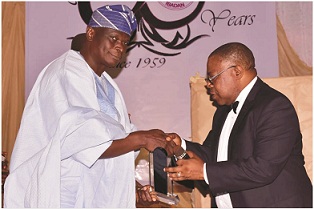 By Adekola Afolabi
|
Ondo State governor, Arakunrin Oluwarotimi Akeredolu has bagged a special award for his outstanding contributions and selfless service to the development of humanity and growth of All Saints’ Church, Jericho, Ibadan.

The special award which showcased the governor as an Ambassador of Christ in governance was presented to him by All Saints’ Church, Jericho, Ibadan, the Oyo State capital, at its maiden Gala/ Awards Night to mark the church’s 60th anniversary, held on Saturday.

The church particularly applauded Akeredolu’s exemplary conduct in governance, and especially his philanthropic selfless service to God in the church where the governor was, for many years, a member of the church’s choir until he became the Ondo State governor.

Chairman of the Church Council, Chief Adegboyega Adebunmi, presented the award to the governor on behalf of the church.

Speaking at the event, the Chief Host, Professor Festus Adesanoye, said Akeredolu was honoured by the church not because he is the governor of Ondo State but because he is one of most illustrious and committed members of the church.

He added that when the governor was member of the church’s choir and even till now he has been doing wonderfully well to develop humanity and ensure the growth of the church through his various philanthropic gestures.

“I’m always happy to know that it is possible for somebody to be a child of God and still be a successful politician. Somebody like Akeredolu is very rare. He is somebody you can trust. Even as a governor he is very humble, he is very modest. We are happy he is a child of God and we are happy with what he is doing in the church. That is why we are celebrating him, “he stressed.

Prof. Adesanoye stressed that the event was organised to celebrate the goodness of God over the church in the last 60 years, saying that the church which started from a humble beginning 60 years ago with seven members has now become one of the best known churches not only in Ibadan but in Nigeria.

In his remarks, Governor Akeredolu, who was represented by his Chief of Staff, Chief Olugbenga Ale, appreciated the church for the honour done him, with a promise to continue to do more.

He described the occasion as another opportunity to testify to the efficacy of prayers and faithfulness of God to His words.

He said: “I assure you that I won’t for any reason derail in whatever you have found in me that you are proud of. This is a reward for integrity, hardwork and the service of God and we are grateful for this.

“We thank the people of God for the recognition and we want to assure them that we will continue to do more for the people. The governor has been serving from his youthful days and even now he has risen to this present position, he has not allowed his position to becloud him, he has not stopped, he is still serving the people and the church.”

The choir of the church also presented an award to the governor to appreciate him for his unparalleled support to the choir at all times.

The governor was therefore appointed as the Grand Patron of the church’s choir.

Another awardee, Mrs. Irene Oshinbolu, equally congratulated the governor, saying the award was a well deserved one. She described governor Akeredolu as a supporter of good things and committed member of the church.