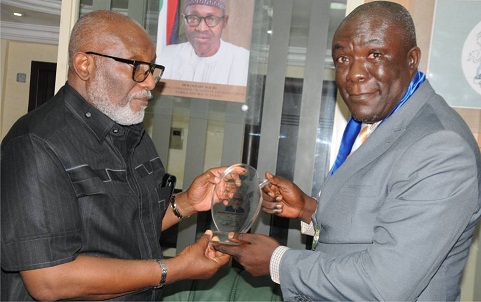 By Chris Chimezie
|
For his unwavering commitment towards the infrastructural development of Ondo State within one and a half years of his assumption of office, the State branch of the Nigerian Society of Engineers (NSE), last week, honoured Governor Oluwarotimi Akeredolu with an award of ‘Engineering Man of the Year’.

The presentation ceremony of the Platinum Award to the Governor was held at his office in Akure.

Presenting the award to the Governor, the Management of the association, led by the branch chairman, Engr Oloruntoba Abe commended the Governor for his overall achievements which he said has surpassed people’s expectations.

“It is in recognition of your sterling performance, especially in the area of infrastructural development within one and a half years in office, that this noble association deemed it fit to bestow the prestigious award on you.

“Your move to initiate Mini-grid to cluster areas in the state to improve electricity supply is a welcome development which signifies your commitment to the infrastructural development of the state by all means”, he said.

According to Abe, the award presentation followed the successful completion of the association’s professional body’s annual programme held recently in Akure, the state capital.

Abe, who equally commended the Governor for appointing members of the body into his cabinet, noted that the laudable gesture will in no small way, contribute to the growth of the profession.

The chairman appreciated Governor Akeredolu for supporting the association towards achieving its core mandates.

Responding, the Governor who stated that no government can function effectively without engineers, stressed that they remain indispensable to the growth of the society.

Akeredolu expressed gratitude to the body for the honour done him and stressed that he will cherish it for life.

He added that a number of projects carried out since he assumed office to transform the state, were through the help of engineers whose impacts cannot be over-emphasised.

Akeredolu, however,  maintained that he will ensure qualified engineers in government establishments occupy positions  based on merit, adding that training and retraining of engineers in MDAs, among other requests by the association, will remain paramount.

Also in the week under review, Arakunrin Akeredolu was at the Dinner and Award party of Adaba 88.5 FM to commemorate the Station’s 10th year Anniversary.

Governor Akeredolu at the event, commended the management and staff of the station for being a veritable partner with his administration and assured them of needed support always.

While stating that the station has been living beyond expectations of its teeming audience, the Governor who led members of his cabinet to the event described Adaba FM as a child of circumstance set up to give people of the state and even beyond a voice.

Akeredolu, who stressed that people listen to the Radio Station and enjoy the quality of its programmes, congratulated them for rendering quality service to the public in the last ten years.

While charging the station to do more towards retaining its audience with series of educative, informative and entertaining programmes, Arakunrin Akeredolu hinted that he will look for ways to address the issue of the only road that leads to the station which has been in a deplorable state for a long time.

In their goodwill messages, Ekiti State Governor-elect, Dr Kayode Fayemi, Ekiti state Chief Judge, Justice Ayodeji Daramola and Veteran Broadcaster, Chief Sanya Oyinsan extolled the virtues and roles of the radio station which has contributed immensely to the socio-economic development and political stability in Ondo and other South-West states.

Earlier the CEO of TVC, the parent body of Adaba FM, Mr Andrew Halton, who was represented by a senior official of the station and the General Manager of Adaba FM, Sir Martins Ayoola, said the station, despite numerous challenges, has been able   to live up to expectations since its establishment ten years ago and expressed optimism that it will continue to advance in years to come.