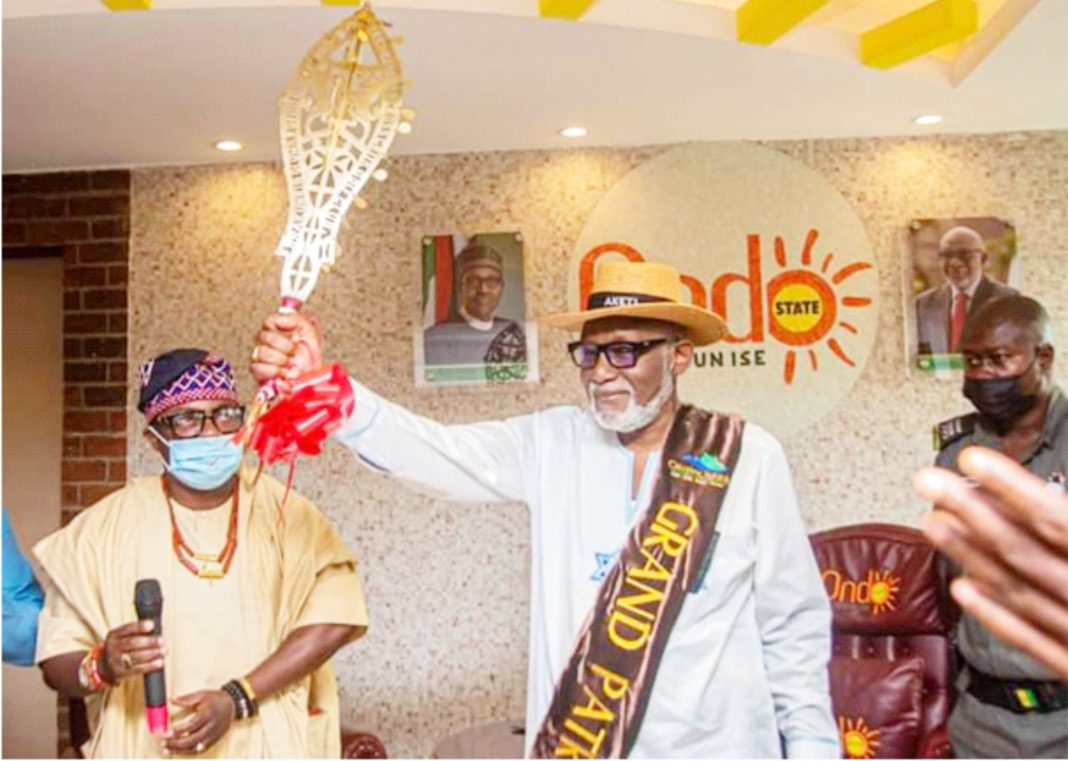 The Governor of Ondo state, Oluwarotimi Akeredolu, has been decorated as Grand Patron of Cross Creek Golf Club, Ilado, Akure.
Decorating the Governor, the founder of the Golf Club, Shola Abidakun, who led other members of the Club lauded the Governor for his passion for the development of sports in the state.
He revealed that he decided to set up the Golf Course in the state as part of his own contribution to support the Governor in his development agenda of the Sunshine State
He said the Golf Course which is set up in Ilado community in Akure North Local Government Area, and less than 20 minutes drive from the state capital, would develop the people mentally and economically.
He said it is a smart Golf Course of about 9 holes, adding that very soon Governor’s Cup to further honour the Governor will be held.
“The impact of this Golf course is going to be huge,; by the time we do captains inaugural you Will be surprised the number of golfers that will be here. The effect is that hotels will be filled up because many people will be identifying with the state. At the end of the day many property and industries will be built”, he said.
He particularly applauded the Governor for his giant strides in the governance of the state, especially in the areas of infrastructural and industrial development, adding that Ondo state has now become one of the foremost producers of cocoa in the country.
In his response, Akeredolu, commended the founder of the Golf Course for bringing the club to the state, saying the development would further boost the socio economic activities of the state which would in turn create more jobs.
While noting that sound mind only resides in a sound body, Akeredolu said exercise including golf playing is very important to have a sound mind.
He disclosed that the road linking the Cross Creek Golf Club, Ilado, Igbatoro Road, would soon be reconstructed to further ensure better access and improve the infrastructural development of the area.
Equally, the Governor charged the Club to also look at the possibility of managing the 18-hole Idanre Golf Course for better result, just as the Governor promised to partner the founder to do more.
Akeredolu revealed that his administration would continue to pursue its various industrial and agricultural projects to boost non- oil revenue in the state, while also continuing to partner private investors in the area of development of the state..
He said the cocoa production and red oil gold projects his administration is pursuing with vigour would greatly improve the revenue base of the state.