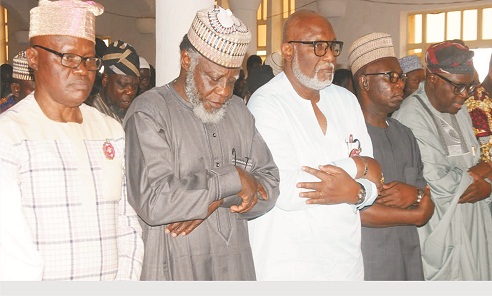 He gave the commendation yesterday at the church service in commemoration of the 2019 Armed Forces Remembrance Day held at the Redeemed Christian Church Of God, Ondo Province 4 Headquarters, Akure.

Represented by his deputy, Mr. Agboola Ajayi, the governor noted that the annual celebration will  rekindle people’s interest in the plight of families, dependants and relations of Nigerians who lost their lives in wars and peace keeping support operations all over the world.

“The current counter terrorism operation by the Nigerian Armed Forces have claimed the lives of some of our finest officers and men. The annual celebration is therefore to honour the departed and appreciate the living heroes, some of whom suffered various deprivations in the cause of wars and operations.

“If we remember our brothers and sisters that fell victim to terrorism and insurgency, we would appreciate the sacrifice made by the officers and men of our Armed Forces.

“Our officers and indeed our country need our prayers. We need to pray that God will grant them victory against the enemies of our dear nation”, he said.

He equally urged churches to pray for the coming elections and seek the face of God to give us free and fair elections and peace before, during and after.

The governor stressed the need for people to conduct themselves in the most peaceful manner, saying that the present administration at both federal and state levels are governments with interest of the masses at heart.

The governor through his deputy read the only lesson of the service from the book of Matthew chapter 25 verse 35 to 46.

In his sermon, the pastor in charge of the region, Pastor Umar Idris who preached on the topic: “Making a Case For the Families of Our Fallen Heroes”, noted that it is a day to weep and mourn the departed heroes who Iaid down their lives so that we can enjoy peace in the nation.

The pastor, who quoted from the Bible in John chapter 15 verses 12 to 13 said the day calls for sober reflection and grief.

Idris described the armed forces as patriotic Nigerians  who have devoted their lives to ensure the security of lives and properties, noting that without them, the nation’s existence would have been jeopardised.

He called on people to emulate their character by thinking about the interest of this country before their personal interest.

He emphasised that all hands must be on deck to ensure that the welfare of families of the departed heroes and those who are alive but are now physically challenged or demoralised is made a priority.

Speaking in an interview with pressmen immediately after the service, the Senior Special Assistant to the governor on Women Affairs, Mrs Titi Adeyemi eulogised the forces who served and are still serving in various peace support operations worldwide.

She assured that the government will continue to support widows of the fallen heroes.

Also speaking, the state chairman of Nigeria Legions, Col. Olu Apata (rtd), informed that the President of Nigeria, Muhammadu Buhari and the present administration in the state has been supportive in terms of welfare of its members.

In a related development, the governor of the state, Arakunrin Oluwarotimi Akeredolu, SAN, on Friday at the Jumat service of the Armed Forces Remembrance Day at the Akure central mosque acknowledged the sacrifices and roles played by the Nigerian Armed Forces to ensure peace and unity in the country.

He eulogised the gallant officers for keeping the world at peace, noting that those who lost their lives in this process are not dead but are alive as they will forever be remembered and celebrated.

The Chief Imam of Akure, Alhaji Yayi Akorede ll, at the urged Nigerians to continue to pray for the peace and unity of the country.