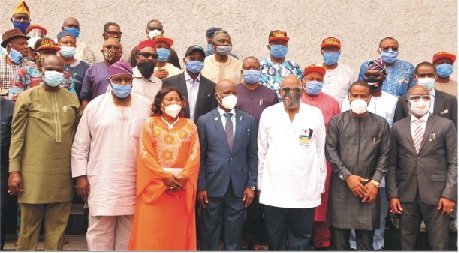 Ondo State Governor, Oluwarotimi Akeredolu has officially confirmed Lucky Aiyedatiwa as his running mate for the October 10 governorship election in the state.
Governor Akeredolu confirmed the choice of Aiyedatiwa during the swearing in ceremony of two new members of the State Executive Council, held at the Cocoa Conferred Hall of the Governor’s Office, Akure.
The new members are Mr. Idowu Otetubi as new Commissioner for Natural Resources and Mr Summy-Smart Francis as the Special Adviser to the governor on Entrepreneurship Development.
The Governor said his running mate who was a former member on the board of NDDC possess verifiable credentials and pedigree.
He explained that the leaders of the party made wide consultations to choose the most suitable candidate as running mate in the forthcoming gubernatorial election in the State.
“We have concluded that Mr. Lucky Orimisan Aiyedatiwa is the appropriate choice given the prevailing circumstances in the political arena at present. This person has been with us since the beginning of this political journey in 2012.
“In arriving at this choice, some important factors assisted the leaders of this great party. We have decided to sever ties with mediocrity and treachery”, the Governor stressed.
While congratulating the newly inaugurated members of the state Executive Council, Governor Akeredolu expressed confidence that the duo of Otetubi and Francis would bring their wealth of experience to bear for the benefit of the people of the State.
He revealed that his administration would continue to encourage all patriots who wish to contribute to the development of the State.
The Governor who emphasised that the people expect so much from elected and appointed officials in public service, also added that no sacrifice is too much for our dear State.
“This administration, under our leadership, will continue to extend our sincere hand of fellowship to all those whose commitment to the progress of our State is not ambivalent. Extremely aware of the verdict of history, we shall ensure that only those who consider service first will be with us as we approach governance with unanimity of purpose.
“The overriding interest of the people will continue to be our guiding principle in all our endeavours. We owe nobody any apology for adhering to this precept”, he said.
Governor Akeredolu said his administration would continue to prudently manage the scarce resources under his care to execute more people oriented projects in every nook and cranny of the State, just as he noted that all the three senatorial districts have witnessed remarkable development in the last three and a half years.
He revealed that his administration has intensified efforts to improve on the methods of revenue generation while also expanding the scope of participation in the economy to ensure that the State becomes less dependent on hand-outs from the Federal Government and donor agencies.
In their separate responses, the new Commissioner and the Special Adviser promised to justify the confidence reposed in them and add values to the present government for the development of the state and the people.