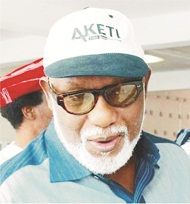 By Mary Agidi
|
Ondo State Governor, Arakunrin Oluwarotmi Akeredolu has affirmed that the state is blessed with talents that could take her name to a greater height if identified, nurtured and given the right training and exposure.

Governor Akeredolu said this while declaring open the third edition of the State Summer Tennis Clinic for children between age four and 18, an initiative of his wife, Betty.

Represented by the Commissioner for Youth and Sports Development, Mr. Dotun Owanikin, Akeredolu noted that sporting activities like the Tennis Clinic serve as a veritable avenue to discover talents for sports development.

He added that the clinic would also create conducive atmosphere of permanent friendship, peace and love among the participants.

According to him, the Tennis clinic, which is citizen-driven, is a demonstration of love and passion for the development of the young ones and commended the initiator and the sponsors.

In her remarks, the initiator, Arabinrin Betty Anyanwu-Akeredolu noted that the aim of the Summer Tennis clinic was to lay a foundation through which future heavy-weight lifters and champions would be pick from the state.

Arabinrin Akeredolu who affirmed that the clinic is citizens-driven emphasised the need why well-meaning citizens should support the mission, saying the initiative is a good way of engaging children during Summer.

She enjoined individuals and organisations to inculcate the spirit of community service by supporting initiative like, this for the development of the young ones.

According to her, the number of the participating children keeps increasing every year, noting that it indicates parents appreciate the initiative.

Arabinrin Akeredolu called for the sustainability of the initiative beyond the tenure of the current administration for the betterment of the state.

She noted that those who would be discovered from the clinic, would be absorbed into Arabinrin Junior Tennis club, where they would be trained further for national recognition.

Earlier in his welcome address, the Chairman, Plamning Committee of the Clinic, Otunba Faduge Akinyemi had stated that the programme started in 2017 with 272 children, 433 in 2018, and a 500 target this year, indicating a significant increase.

He thanked the donors and sponsors while calling on more parents to come and register their children, noting that there is machinery to accommodate many participants.

The clinic which was organised by the Office of the wife of Ondo state governor in collaboration with State Sport Council, has Chief P. C Ezekwere, Cecil Supermarket, Peaches Cakes and Creams, Chief Emmanuel Ejiofor, Teniola Famoroju foundation, among others as donors.