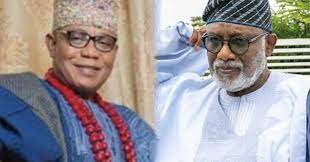 Governor Oluwarotimi Akeredolu of Ondo State, will tomorrow Tuesday, be conferred with the National Honour in the rank of Commander of the Order of the Niger (CON).

Akeredolu alongside other eminent Nigerians from Ondo State and across the country are listed as recipients of the 2022 National Honour Awards which are in different categories.

No fewer than 11 eminent Nigerians of Ondo State origin have been named as recipients of the National Honours.

The Honours will be conferred on them by President Muhammadu Buhari at the International Conference Centre (ICC), Abuja.

The Minister of Special Duties and Inter-Governmental Affairs, Senator George Akume, had earlier sent separate letters to all the recipients, notifying them of President Muhammadu Buhari’s approval of the conferment of the National Honours on them.