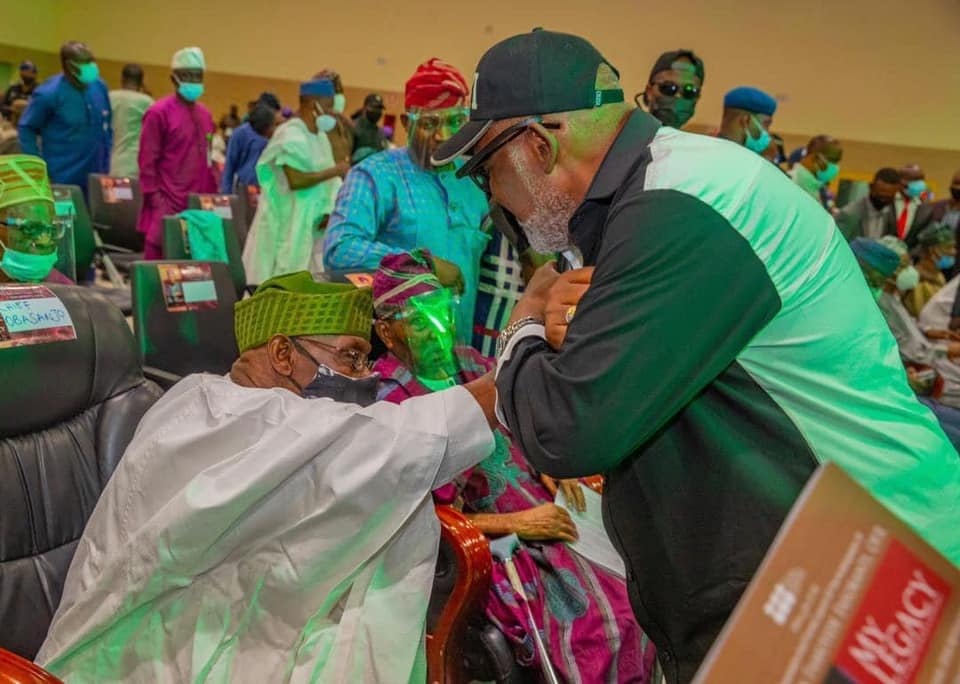 The Ondo State Governor, Oluwarotimi Akeredolu, has extolled the rare virtues of the leader of pan-Yoruba Socio-Cultural Organization, Afenifere, Pa Reuben Famuyide Fasoranti, OFR, at his book launch.
The Governor noted with utmost joy the impactful life of the Afenifere Leader on Yoruba nation and Nigeria in general, describing the nonagenarian as first among equals.
Speaking at the public presentation of the autobiography of Chief Reuben Fasoranti, tilted: “My Life, My Legacy” (Service with Integrity and Excellence), held at the International Culture and Event Centre (The Dome) in Akure, Governor Akeredolu said judging by the uncountable number of people so far mentored to stardom across the country, the author remains first among equals.
The event was attended by former President of Nigeria, Chief Olusegun Obasanjo, former Lagos Governor and National leader of the APC, Bola Tinubu, Governors of Ekiti and Osun states, PDP Governorship candidate in Ondo state, Eyitayo Jegede,and former Governor of Ogun state, Otunba Gbenga Daniel.
Others includee the Olu of Ilu-Abo, Chief Olu Falae, Basorun Seinde Arogbofa, representative of Ooni of Ife, Prof. Stephen Banji Akintoye, members of Afenifere and other dignitaries within and outside the state.
Governor Akeredolu emphasised that Pa Fasoranti is a living legend and a colossus in the field of education and politics whose contributions to human capital development would for ever remain a pride of Ondo State and Nigeria at large.
“We are here today to celebrate an icon, not only of this state but of this great nation who has devoted most part of his time into moulding young ones.
“All the students who went through you, are really proud of you. You made a lot of us through our upbringing. I must say, you are also our pride here in Ondo State. We are proud of you”, the Governor added.
Governor Akeredolu used the occasion to promise that his administration would support the establishment of the Democratic Institute which is the desire of Chief Reuben Fasoranti.
” A democratic institute will help a lot at least in bringing and building values, your values which you held on to. Sir, you have been involved more than anyone in educational advancement we know.
“You are a teacher, Principal, and with your late wife, you established a flourishing school, and all of us still see it”, he said.
While enjoining the political class to continually imbibe the culture of excellence for the service of mankind, Governor Akeredolu expressed optimism that Nigeria would be greater and better in the life time of the great icon and nonagenarian.