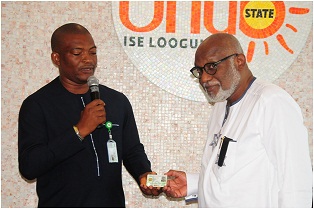 By Adekola Afolabi
|
Ondo State Governor, Arakunrin Oluwarotimi Akeredolu, has called for effective synergy between the National Identity Management Commission (NIMC) and the Nigerian Immigration in order to ease the problem associated with obtaining International Passports.

Akeredolu, who stressed the importance of the National Identity Card, said his administration would continue to give necessary support and assistance to the commission in the ongoing registration exercise.

He assured that spaces would be provided at the Local Government secretariats across the state for the continuous registration and capturing of citizens into the National Identity card database for the speedy issuance of the card to people of the state.

The governor spoke while being presented with his National Identity Card, in his office, Alagbaka, Akure, by the Director General, National Identity Management Commission and Chief Enrollment Officer of the Country,  Aliyu Aziz.

Akeredolu, who appreciated the commission for fulfilling its promise of presenting his Identity card to him, stressed the importance of the issuance of identity cards to Nigerians in the battle against insecurity.

Speaking earlier while presenting the card to the governor, the Director-General of NIMC,  Aliyu Aziz, said the activation and presentation of the card was a follow-up to the registration of the governor in September 2018.

The Director General, who was represented by the State Coordinator of NIMC, Mr. Akinwale Agbotoba, said the card in a form of smart card is in compliance with global standards, while its applications include carrying out wide range of services in the Nigerian identity ecosystem.

The DG said the card has a chip where individual’s demographic and biometric information are stored in the National Identity database for easy verification purposes and authentication.

He also added that the National Identification Number, NIN, equally embedded in the chip, would be a veritable tool to smash identity theft and acts of terrorism in the country.

While stating that the card has several security features that could prevent being cloned by fraudsters, the NIMC boss said the card also has a payment solution applet that could be used on ATM and POS.

“The card can accommodate in the future, e-Pension, e- Voting, e-Taxation, e-Insurance, e-Health, ” he stressed.

The NIMC DG, however, solicited the support of the Ondo State Government in the areas of sensitization and mobilization of the citizens and residents of the state through the state-owned media organisations.