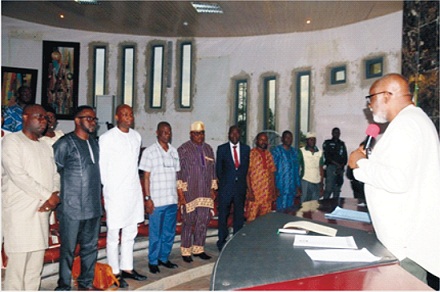 By Chris Chimezie
|
Last week, the State Governor, Arakunrin Oluwarotimi Akeredolu (SAN), charged members of the Committee on Land Reform to ensure that policies are initiated and developed for proper implementation, administration and management of land in the state.

The Governor gave the charge while inaugurating the 11-man Committee members of the State Land Reform at the Cocoa Conference Hall of the Governor’s office in Akure.

He identified inconsistent land policies, its attendant uncoordinated execution, poor monitoring and evaluation as factors militating against the effective governance of land sector.

The Governor hinted that upon the constitution of the State Executive Council, he directed the the Ministry of Lands and Housing to urgently encourage, explore possible means of correcting whatever observed lapses and anomalies of the past.

According to Governor Akeredolu, the Ministry was mandated to focus on Acquisition of land, both public and private, procurement of title deed to land, commercialization through land use charge, digitization of the land process, mapping of the State, legal reforms as well as management and monitoring of land.

He added that the leadership of the Ministry of Land and Housing was encouraged to embark on measures which included peer review trips to other states to ensure the institution of enduring policies around the land sector.

He expressed confidence that the reform would be comprehensive, pragmatic and simple enough to enable people of the state buy into its overall goal which is to enable government improve the quality of life of the people.

The Governor further hinted that efficient governance and responsible use of land would attract large scale agricultural investments adding that it would enhance job creation through entrepreneurship and industrialisation.

Akeredolu listed terms of reference under which the Land Reform Committee will operate to include; Review of existing land reform activities in the state, Review of implementation of Presidential Technical Committee on Land Reform (PTCLR), Assessment of Word Bank Ease of Doing Business Index, data gathering for centralized land repositioning among others.

He assured that the Committee’s recommendations will be instrumental to charting a new course for the state as regards the most valuable sector upon which other variables rest.

Governor Akeredolu however, charged members of the Committee to be more efficient in discharging their duties, even as they consider useful suggestions more valuable in their assignments.

Earlier, Commissioner for Lands and Housing, Mr Donald Ojogo noted that the Committee embarked on series of trips and the outcome revealed the need for a wholistic, more enduring and a more effective land management and acquisition system in Ondo state.

He said the Committee particularly took cognisance of the state report on Blueprint otherwise known as the Strategic Policy Development and Implementation Committee with its focus on land aspect.

“We observed that the State, with a total landmars of about 15,500 sphere kilometers and having a population of about 3.6 people would be under pressure to effectively manage such which informed our collaboration with land experts on how best we could come up with policies that would be enduring.

The Commissioner however stated that the Land Reform Committee would ensure that policies are initiated and developed for proper implementation with minimum errors in administration and management of land.

Responding on behave of the Committee, its Secretary, Mr Wale Adegoke while thanking the Governor for the opportunity given the Committee to serve, assured that they will not compromise the confidence reposed in them.

He stated that the Committee would focus on the best practices of purposeful land administration system that would be able to drive revenue generation and investment to the State which would ultimately create job opportunities.

The 11-man Committee members has former Vice Chancellor of the Federal University of Technology, Akure (FUTA), Prof Peter Awoniyi as its Chairman, Commissioner for Lands and Housing, Mr Donald Ojogo as the Co-Chairman, while Mr Wale Adegoke will serve as Secretary.

Members of the Committee include Commissioner for Physical Planning and Urban Development, Chief Solagbade Amodeni, Permanent Secretary, Ministry of Lands and Housing, Engr Alex Aragbaiye, Acting Surveyor-General, SSA to the Governor on Agric and Agribusiness, Pastor Akin Olotu, a representative of ONDIPA, a representative of BIR, SSA to the Governor on ICT and Director Deed from the Ministry of Lands and Housing.