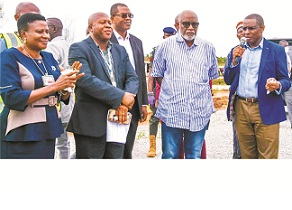 The Management of Akure Airport has hailed the Ondo State Governor, Arakunrin Oluwarotimi Akeredolu,  for his untiring efforts at making the airport receive the much needed attention from the Federal Government and Airline Operators.

The Airport Airspace Manager, Mr Adebayo Ogunleye, who led other officials and staff to welcome the governor to various ongoing projects within the airport, said the personal interventions of Governor Akeredolu have attracted the quantum of the ongoing projects.

Ogunleye added that by the time the projects are commissioned for use, the envisioned capacity of the airport of being an international cargo airport would be realised with ease.

At the new Control Tower, the Airspace Manager informed that the project was 80% complete adding that the tower would be made perfectly functional with the Instrument Landing System, ILS, an equipment required to facilitate  easy landing of aircraft irrespective of weather conditions.

Also to work with the ILS to make landing and taking off seamless for aircrafts, Engineer Ogunleye said the airport is being kitted with a Doppler Very High Frequency Omnidirectional Radio Range, DVOR, which is a navigation aid essential to gather required information for identifying, to and fro movements, and bearing.

Also speaking, the Airport Manager, Mrs Joke Olatunji commended the governor for attracting patronage to the Akure Airport which have scaled up its volume of activities

In his response, Arakunrin Oluwarotimi Akeredolu expressed happiness that the decision of his administration to draw attentions to the Akure Airport by building routes and make them profitable for airline operators have turned out to be a wise decision.

He recalled that at the inception of his administration, the Akure Airport was virtually in the dark with little or no activity to justify its existence, but that through concerted efforts, Airpeace was encouraged to come up with the Lagos -Akure route while Overland reactivated its Abuja-Akure route.

Governor Akeredolu assured that the degree of collaboration of his administration with all authorities and stakeholders in the aviation industry in Nigeria will not diminish in view of the desire to ensure that the Akure Airport achieves its status of an International Cargo Airport.