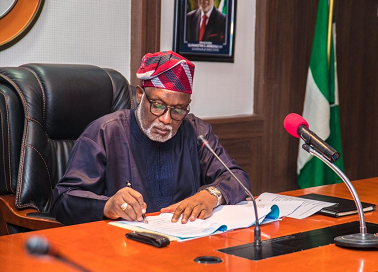 Ondo State governor, Arakunrin Oluwarotimi Akeredolu, at the weekend inspected the ongoing construction of the new 100 beds  General Hospital in Ifon, in Ose Local Government Area of the state.

The construction of the hospital is a special programme under the Sustainable Development Goals (SDGs) in partnership with the Governor Akeredolu’s administration.

The work has reached an appreciable level.

Meanwhile, Governor Oluwarotimi Akeredolu of Ondo State has charged  participants of the Federal Government Amnesty Programme to take advantage of their training to develop themselves.

He also called for the incorporation of other repentant militants into the amnesty programme.

The governor who spoke at the weekend during his visit to the Coordinator of the Presidential Amnesty Programme, Prof. Charles Dokubo, also called for the continuous assessment of the amnesty programme to ensure its success.

The Governor who was accompanied  by the State Commissioner for Lands and Housing, Mr. Donald Ojogo and the Chairman of the Ondo State Oil Producing Areas Development Commission (OSOPADEC) Mr. Gbenga Edema, equally added that the Federal Government must have budgetary provision for the amnesty office to run the programme successfully.

Akeredolu noted that participants must use their experience and training to develop themselves and also allow other repentant militants to be incorporated into the programme.