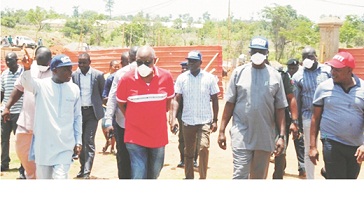 By Adekola Afolabi
|
The Ondo State Governor, Arakunrin Oluwarotimi Akeredolu, has expressed satisfaction with the quality of repair work being undertaken by the state through the Direct Labour Agency of the Ministry of Works.

Akeredolu said this yesterday  when he inspected the ongoing work at the project site.

The governor who was received by the Commissioner for Works, Mr. Saka Yusuf-Ogunleye  and the Special Adviser on Lands, Works and Infrastructure, Raimi Aminu, said the repair work became imperative as a result of terrible explosion which damaged the Akure Owo Road at Eleyowo/Ilu-Abo axis in Akure North Local Government Area of the state.

Arakunrin Akeredolu said the Akure Owo Federal Road being the only link between other parts of the state with the Northern Senatorial District and the shortest route to access the Northern, Eastern and Southern parts of the country from Akure, cannot be left unrepaired for too long.

Earlier the Special Adviser informed  the governor that the reconstruction of the bad portion of the road was being done in line with the specification of the Federal Ministry of Works whose officials have always joined in the supervision.

While assuring that the Federal Government would reimburse the state of the cost of fixing the road,  the Special Adviser said the job would be completed within the ten weeks.

Also the State Governor and his entourage paid a sympathy visit to   the premises of Possibility Prayer Mountain of All Nations where the Overseer of the Church, Prophetess Olayemi Adesida aka Omo ObaJesu, told the governor that over 20 buildings, several motor vehicles and countless several other personal and church belongings were lost the explosion.

Prophetess Adesida who claimed to have lost all her personal effects to the unfortunate incidence pleaded for urgent assistance by governments at all levels and public spirited individuals.

In his response Governor Akeredolu enjoined the victims to bear the loss with equanimity with the belief that the Almighty would come to their aid.

The governor said though the National Emergency Management Agency, NEMA and State Emergency Management Agency, SEMA,  have been around to access the extent of damages to property of victims after his visit on the day of the devastating incident; the second visit he said was to give assurance that the state government would not leave the victims to bear the brunt of the incident alone.

Governor Akeredolu said there was the need to embark on proper valuation of all property destroyed on which the company whose property caused the explosion would be made to pay to the last penny.

“We are going to make the company who has the explosives to pay for every thing damaged.

“Before we can make any demand on them, proper valuation must be done and I am happy that our officers in the Ministry of Lands are already doing the valuation”,he said.

He pleaded with every property owner to cooperate with  the valuers.