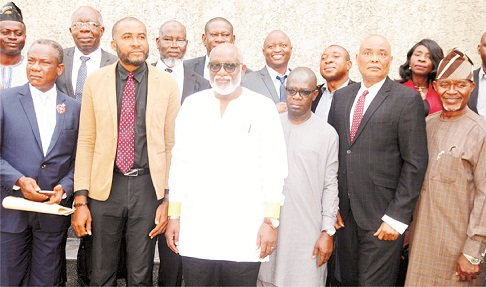 By Sade Adewale
|
Ondo State Governor, Arakunrin Oluwarotimi Akeredolu has commended the member representing Ondo West/Ondo East in the House of representatives, Mr Joseph Akinlaja for supporting the development of the University  of Medical Sciences, Ondo, (UNIMED) by donating a N170 million worth of building to the Faculty of Clinical Sciences .

Akeredolu who was represented by the Commissioner for Education, Science and Technology, Pastor Femi Agagu stated this at the ground breaking ceremony of the building held at the University.

Akeredolu thanked the donor for supporting the development of the  University and enjoined all sons and daughters of Ondo kingdom to emulate him.

He urged people who made pledges to redeem their pledges, saying redeeming pledges is a mark of honour.

The Governor added that what is happening in Ondo kingdom is something that is worth recommending to other kingdoms to emulate.

Also speaking, the former Governor of the state, Dr Olusegun Mimiko thanked the present administration for supporting the University and for not repositioning the health sector.

The Osemawe of Ondo kingdom, Oba Dr, Victor Adesimbo Kiladejo said indigenes of Ondo kingdom are lovers of education saying, Akinlaja is a true son of the soil that wants the development of the kingdom.

Vice Chancellor of the University, Prof. Friday Okonofua thanked Mr Joseph Akinlaja for donating the building to the Faculty of Clinical Sciences, he saying the donation will complement the efforts of the government of Ondo State in developing the University to a world-class standards.

The donor, Mr Joseph Akinlaja said that he embarked on the project  as an ardent supporter of the former governor, Dr Olusegun Mimiko whose government established UNIMED..

He noted that the donation is an addition to his numerous personal intervention projects towards community development which include channelisation, grading of rural and urban roads, training and empowerment of men and women among others.

Akinlaja thanked Governor Oluwarotimi Akeredolu, SAN for his continued support for the University .