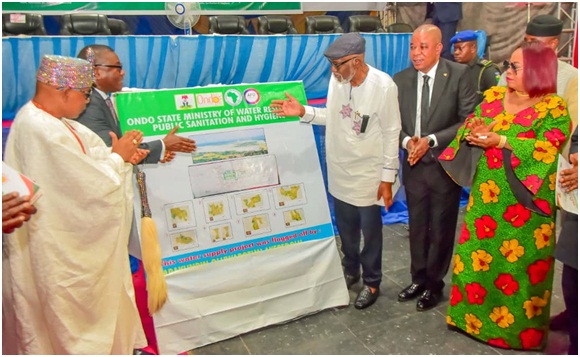 Ondo State Governor, Oluwarotimi Akeredolu on Tuesday launched the rehabilitation of the Owena Dam project to provide safe and potable water to the people of the six local government areas in Ondo central senatorial district of the state.

He disclosed that the KAMOMI AKETI project, which is the arrowhead of the policy, has now become the template of provision of rural water in Nigeria.

The Governor said the event was significant as it further demonstrated his Administration’s abiding commitment to improving general access to potable water supply in every nook and cranny of the State.

He explained that when his administration came on board in 2017, the percentage of water supply and access of the people to potable water was abysmally low 4% as majority of the water schemes across the urban and rural areas of the State had become moribund and were no longer functioning.

The Governor said his administration then took steps to change the narrative by introducing the KAMOMI AKETI Water Policy with the aggressive construction and rehabilitation of boreholes for rural dwellers and the rehabilitation of dysfunctional water schemes in the urban areas.

“It will be recalled that at the inception of our Administration in 2017, we made it abundantly clear to our people, our Action Plan to lay a good foundation for sustainable water supply both in the rural and urban communities.  In pursuance of this goal, we took a critical look at the percentage of water supply and access of the people to potable water which surprisingly was revealed to be abysmally low 4%.

“Today, by the special grace of God, we can disclose that the percentage of Ondo State residents that now have unhindered access to potable water has increased to 17.6% and we are not resting on our laurels.

“In our resolve to equally achieve this feat in the urban water sector, we have since embarked on massive investment in the restoration and expansion of existing urban water infrastructure across the State in order to provide water for all in fulfillment of our campaign promise and commitment to the welfare of our people.

“Consequently, Okeigbo, Ako/Oba, Idoani, Okitipupa, Ilutitun and Araromi Obu Water Supply Schemes were rehabilitated and had since been commissioned to ensure provision of sustainable potable water supply to these communities and their environs.

“As you are well aware, one of the largest dams in Nigeria, the Owena Multipurpose Dam is located in our State. You are equally aware that this Multipurpose Dam had been abandoned for a relatively long period of time.  Also, the Ondo-Owena Water Supply Scheme, along Ondo Road, had been dysfunctional for a long time.

“The situation of these two viable water schemes was found unacceptable to our administration. In order to rehabilitate the Owena Multipurpose Dam, the State Government, through the Federal Government, approached the French Development Agency (AFD) and secured a credit facility of US$57 million to rehabilitate this Dam so as to ensure the supply of potable water to a good percentage of the Akure metropolis.

“However, the report of a pre-feasibility study of the project revealed that the AFD facility (US$57 million) could not cover the reticulation to the entire Akure metropolis. Hence, the State Government again approached the African Development Bank (AfDB) for a credit facility of US$104.2 million to enable it co-finance the project.

“The AfDB facility will not only cover the reticulation to other parts of Akure metropolis, it will also assist in facilitating the rehabilitation of Owena-Ondo Road Water Supply Scheme to provide water for six local government areas of Akure South, Akure North, Idanre, Ondo East, Ifedore and Ile-Oluji/Oke-Igbo.

“Let me, for the avoidance of doubt, state that these restoration efforts remain a key policy programme of our administration, as more and more communities continue to benefit.  Rehabilitation of other moribund urban water schemes not covered under the scope of the AFD/AfDB credit facility, such as Awara, Ose/Owo, etc would equally be given attention as efforts are ongoing to secure funding from the Natural Resources Development Fund for their rehabilitation”, the Governor added.

In his welcome address, the Commissioner for Water Resources, Public Sanitation and Hygiene, Fatai Olotu said when the Urban Water Supply and Sanitation Project is completed, it would help facilitate the attainment of the Sustainable Development Goals, (SDGs) to fulfill the  Governor Akeredolu led government REDEEMED agenda on provision of water to the people of the state.

The Director General, AFDB, Nigeria, Lamin Barrow, in his remarks noted that the Akure Water Sanitation Project is expected to yield significant development benefit to the residents, providing potable water for 24 hours.

He emphasized that one of the unique feature of the project is the establishment of social water supply connection fund.