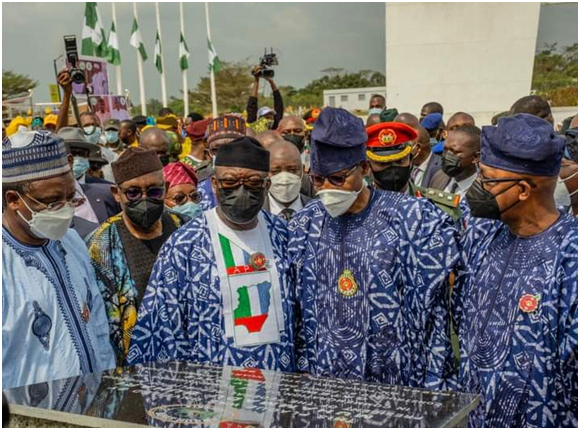 The President was in the state to commission some landmark projects including the Gateway City Monument Park and Sagamu Interchange.

The Host Governor, Prince Dapo Abiodun appreciated President Buhari for coming to commission the laudable projects executed by his administration.

He emphasized that the projects were parts of the promises of his administration to deliver social and economic development to the state, even as he promised to continue to do more.

In his Speech, President Muhammadu Buhari saluted the efforts of Governor Dapo Abiodun for the landmark projects despite the dwindling resources and economic challenges.

He urged the governor to keep the banner flying towards delivering good governance to his people, saying the federal government will continue to complement his efforts at solving the various challenges confronting the people of Ogun State.

Also at the event were members of the National Assembly; traditional rulers, religious leaders and top government functionaries across the country.