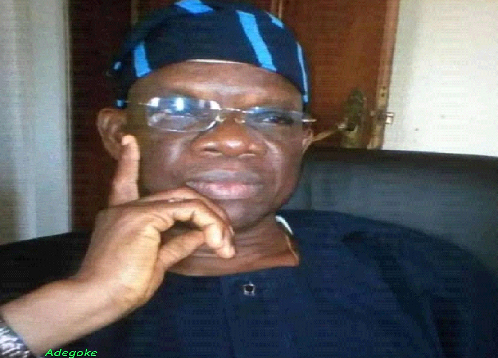 Ondo State Governor, Oluwarotimi  Akeredolu, has said the death of Dr. Jacob Laoye Adegoke, MFR, amounted to further depletion of the generation of retired public servants whose commitment to service is  matched with unblemished records.

Akeredolu noted that he received the demise of the former Permanent Secretary and ex- Chairman, Governing Council of the Rufus Giwa Polytechnic, Owo, with a deep sense of loss.

Also, the Oyemekun Grammar School, Akure (OGSA) Alumni Association Worldwide, expressed shock over the sudden death of its former National President, Dr. Adegoke, describing his demise as a colossal loss, not only to the immediate family, but also to the state at large, due to his wide range of experience as a respected bureaucrat.

Governor Akeredolu in a statement signed by his Chief Press Secretary, Richard Olatunde, commiserated with the immediate family of  late Adegoke, while praying to God to grant him eternal rest.

“The death of any human stirs the veins. But the pains associated with the passage of such a great mind with immeasurable wisdom to behold can be devastating. The late Adegoke exuded an alluring oratory quality that was spellbound.

“His exploits in the public service of Ondo State stood him out as a respected bureaucrat. His passion for the state was evident in the quality of service he rendered as he climbed the ladder in the civil service and retired as a Permanent Secretary.

“Late Adegoke’s passion for service earned him another assignment when he was appointed as the Chairman, Governing Council of the Rufus Giwa Polytechnic, Owo. Under his leadership, RUGIPO experienced a huge leap in development. His salutary efforts were complemented with unbridled courage and resilience in retooling the institution for optimum performance.

“His calmness even in the face of daunting challenges earned him the appellation of “Aiyeole”. His approach to life was easy and steady. Adegoke’s passion for developing young minds in the civil service earned him huge followers. He was a worthy mentor to many.

“His dedication to the work of God was inspiring. He was a Christian who served God and committed to working in God’s vineyard.

“He was a combination of positively endearing qualities. His brilliance was thrilling, just as his community service was commendable. He was an asset to this state and the country at large. No wonder he was conferred with the National Award of Member of the Order of the Federal Republic (MFR). He will be sorely missed”, Akeredolu said.

Meanwhile, the National President of  Oyemekun Grammar School, Akure Alumni Association, Dr. Adeniyi Ijogun, said late Dr. Adegoke was a committed servant leader, whom he cherished his unmundaned desires in which he manifested trustfulness, love, passion, and pure heart when he was elected National President.

Ijogun said the entire membership of OGSA Alumni worldwide commiserates with his immediate family, friends and associates at this trying time, and urged them to take solace in God.