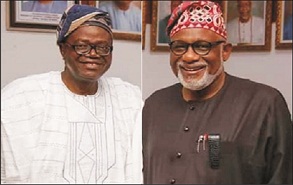 By Oguntoyinbo Josephine  & Adekola Afolabi
|
The Ondo State Governor, Arakunrin Oluwarotimi Akeredolu, said the Minister of State for Labour and Employment, Senator Tayo Alasoadura still has in him, an unusual youthful energy filled with an immeasurable pool of wisdom and experience for Nigeria to benefit from, even as he clocked 70.

Akeredolu, who stated this in a congratulatory message to Senator Alasoadura on the occasion of his 70th birthday. joined relations, friends, political associates and numerous other well wishers to celebrate the Minister of State for Labour and Employment.

According to a statement signed by the state Commissioner for Information and Orientation, Donald Ojogo on behalf of the government and the people of the state, stated “nature harbours numerous incredible channels to dispense God’s grace and favour unto men. “One of such is not just the grace of age, but the uncommon one which combines good health with a sound mind of courage and dependability at all times. Senator Alasoadura enjoys this, no doubt.

“For Alash, his life has been a life of determined and defined purpose; an enviably resilient and eventful one which to the admiration of all, has impacted positively on his immediate environment. To us in Ondo State, he is a worthy and dependable ally, a consummate leader and an admirable partner in whom we are pleased.

“Celebrating the platinum milestone; just 48 hours after his inuaguration as the  Minister of State for Labour and Employment by Mr. President, remains God’s special way to deepen His grace and love.

“The Government and indeed, the good people of Ondo State wish our Honorable Minister God’s continuous blessings upon his life as he savours this auspicious moment of the lord’s favour,” he said.

The Speaker, Ondo State House of Assembly, Mr Bamidele Oleyelogun  congratulated the Minister of State  for Labour and Employment, Senator Tayo Alasoadura as he turns 70.

In a statement released by the Speaker’s Special Adviser on Media, Mr Ojoawo Abidemi on behalf of other lawmakers in the assembly, Oleyelogun joined other well wishers across the nation to rejoice with the minister on the occasion.

The Speaker, who thanked God for sparing his life to witness yet another special day, prayed that he will celebrate many more of it in good health and abundant peace of mind.

Oleyelogun, who described the minister as an administrator of good repute who will no doubt represent the state well in the Federal Executive Council ,affirmed that his goodwill and antecedence as a loyal and committed progressive will impact positively on the state and the nation at large.

He equally prayed that God will grant him wisdom and grace to continue to discharge his duties for the benefit of mankind.