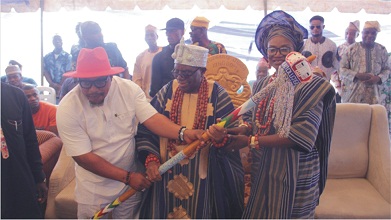 From left: Commissioner for Local Government and Chieftaincy Affairs, Chief Akinwumi Sowore, who represented the State Governor, Arakunrin Oluwarotimi Akeredolu, presenting the Staff of Office to Olujigba of Ijigba Oba Luyi Rotimi, while his Olori watches at the ceremony…yesterday Photo: Stephen Olajide

Akeredolu reiterated the determination of his administration to maintain dignified neutrality in the process of selecting  obas, saying it is absolutely the responsibility of the people.

Represented by the state Commissioner for Local Government and Chieftaincy Affairs, Mr. Akinwumi Sowore, Akeredolu urged traditional rulers to restricts their reign to their domain only.

He stressed that the idea of any monarch extending his territory to other areas outside his domain will not be allowed.

Akeredolu who congratulated the new monarch on both his ascension to the throne and the elevation of the stool of Olujigba of Ijigba from ‘Olu’ to obaship status in the State noted that his administration is not afraid to take decisions.

He promised that his government will look into the issue of paramountcy and do the needful .

Governor Akeredolu implored the Olujigba to assume the position of a father to all the people in his domain.

“I encourage you to accommodate everyone in your community, bearing in mind that the responsibility to lead Ijigba to its next level of socio-economic development has been placed on your shoulders.

“In the same vein, I implore the people of Ijigba to ensure that Kabiyesi’s reign is significantly peaceful and successful. His success depends greatly on your loyalty, cooperation, and support,” the Governor said.

, He urged Olujigba to always remember that his achievements on the throne will depend largely on the quality of cooperation and goodwill from the people of his kingdom.