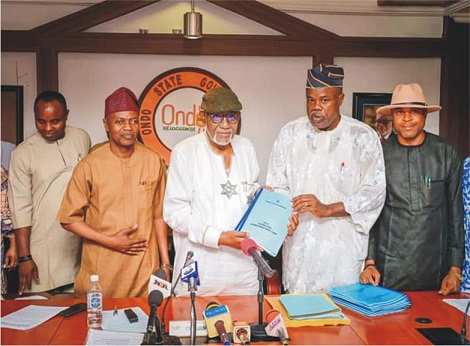 Governor Akeredolu had on December 5 2022, presented a total budget proposal of N272.736 billion to the State House of Assembly for approval and passage.

The House Appropriation Committee led by Mr. Akintomide Akinrogunde said the budget was increased in cognizance of the current economic realities in the country.

Governor Akeredolu, while signing the 2023 appropriation bill into Law at the Exco Chambers of the Governor’s office, Alagbaka, Akure,  noted that N129, 839 billion, representing 47 percent of the total budget is to cater for recurrent expenditure, while N146,140 billion, representing 52.99 percent is for capital development.

According to the Governor, the signed Budget, Christened “Budget of Shared Prosperity”, was prepared from the inputs garnered from the people during the Town Hall meetings with various stakeholders across the state.

He stressed that the budget preparation was also based on the REDEEMED agenda of his administration, which he said was the guide post for development of the state.

The Governor described as heartwarming, the recent ranking of Ondo State as the state with the least poverty index in the country.

Governor Akeredolu said the ranking by the National Bureau of Statistics, in collaboration with United Nations Development Programme (UNDP), United Nations Children’s Fund (UNICEF) 2022 Multidimensional Poverty Index of States in Nigeria, is a testimony that his administration is on the right track.

The Governor, who decried the lean revenue from the Federation Accounts Allocation Committee (FAAC), assured that his administration will strive to logically implement the 2023 budget to the letter, adding that his government has a pact with the people of the state.

Earlier, the Speaker of the House of Assembly, Rt. Hon. Bamidele Oleyelogun, while presenting the 2023 appropriation bill to the Governor, commended him for the priority attention given to all sectors of the economy of the  state.

He said:”The pace of infrastructural development in the State is highly noticeable despite paucity of fund. All these are manifestation of Mr. Governor’s strong resolve and determination to take this state to the level he envisioned.

“Let me also commend him for the timely presentation of this fiscal document which led to its early passage.

“I therefore at this juncture, must commend and appreciate my distinguished Honorable colleagues, the Members of Finance and Appropriation Committee, the Clerk and Staff of the Assembly for their wonderful efforts and in ensuring that the Appropriation Bill is successfully passed into Law at the record time.”

ODSG to upgrade RUGIPO to Varsity