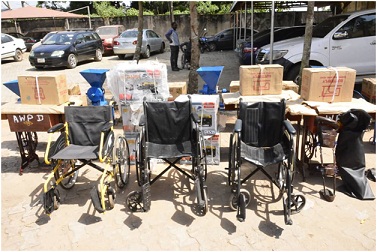 Ondo State Governor, Oluwarotimi Akeredolu, on Thursday put smiles on the faces of special people in the state with the distribution of several empowerment materials to mark 2022 International Day of Persons with Disabilities.

Items distributed by the state government through the Agency for the Welfare of Persons with Disabilities to the beneficiaries included wheelchairs, sewing machines, grounding machines, generating sets and foodstuffs worth millions of naira.

Speaking at the well attended ceremony held at the premises of the Agency for the Welfare of Persons with Disabilities, Akure, Governor Akeredolu said barriers created due to the nature of the condition of persons with disabilities should not be a cause to deny them access to inclusive society and to enjoy equalities among their able colleagues.

The Governor who was represented by Special Adviser on Gender, Olamide Falana, explained that, instead, the innovations including assistive devices and several other innovative ideas should be developed and applied to bridge the barrier and develop inclusive society.

He added that his administration would continue to do its best to encourage, support and improve the welfare of special people in the state.

Akeredolu disclosed that his government has also done so well in the area of provision of transformative solutions using technology advancement, which includes provision of Elevator Machine at his Office to bridge the initial barrier that denied persons on wheelchairs access to the topmost of the building, just to mention a few.

Earlier, the Chairman of the Agency for the Welfare of Persons with Disabilities in Ondo state, Princess Folasade Arise , appreciated Governor Akeredolu for approving fund for the celebration, describing Akeredolu as a loving and caring father and friend of special people.

She particularly applauded Governor Akeredolu for including persons with disabilities in all activities of his government and encouraging them to have roles similar to their peers who do not have any disability.

She also commended Governor Akeredolu for the presentation of empowerment materials including washing machines, financial empowerment and educational support among others, to the persons with disabilities earlier this year.

Arise explained that all persons with disabilities in the state will forever be grateful to the Governor for always putting smile on their faces despite the paucity of funds, adding that the disability community has continued to enjoy the needed support from the present administration.

Some of the beneficiaries including Motunrayo Afolabi, Njoku Jude, Mustafa Serifat, Folusho Ogunmolade, expressed their gratitude to the Governor and the Agency for making lives more comfortable for them.