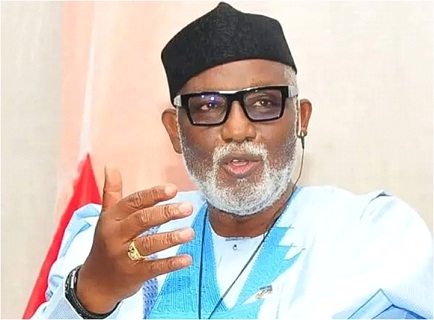 The Governor of Ondo State, Oluwarotimi Akeredolu has charged public servants to always come up with good ideas and innovation that will assist policy makers to bring about national development and positive change in the society.

Akeredolu gave the charge while speaking at the 2022 Annual Lecture/Launching of the Year 2023 Calendar and Get-together organised by Forum of Heads of Federal Government Establishments and Institutions in Nigeria, Ondo State chapter.

The Governor who was represented by his Chief of Staff, Chief Olugbenga Ale, said public officers are central to national development, hence they must continue to come up with good ideas and innovation that will help political leaders in addressing various challenges facing the country.

The topic of the lecture held at Afen Adebayo Multipurpose Hall, FUTA, is “Governance in Nigeria: Issues, Impact and Prospects for National Development”.

Governor Akeredolu explained that if competence, discipline, good characters and attitudinal change are exhibited by public servants the issue of corruption in the system will become a thing of the past.

“If you are talking of national development, the public officers are central. If you talk of budget, its implementation, they are involved. Even though the political leaders play a significant role, the public servants as the engine room of government have a lot of things to do.

“So, for us, this is an opportunity to tell them to recalibrate their efforts, change their attitude, look at their competence and characters to bring about national development”, he added.

Akeredolu particularly applauded the guest lecturer for doing justice to the lecture, saying all the contents of the lecture are relevant and capable of solving the current challenges facing the country.

While saying that the country must prepare for positive change for the betterment of all, Governor Akeredolu also called on the Forum to make good things happen in the country.

The guest lecturer, Prof. Busuyi Mekusi  lauded the Governor for his continued clamour for devolution of more power to the federating units to ensure more development at the state levels.

He equally lauded Governor Akeredolu for his achievements so far which have also made the state has the lowest poverty level in the country, just as he encouraged government to sustain the tempo.