Home Featured Akeredolu thanks all as Sanwo-Olu, Fayemi, Oyetola, others visit Owo 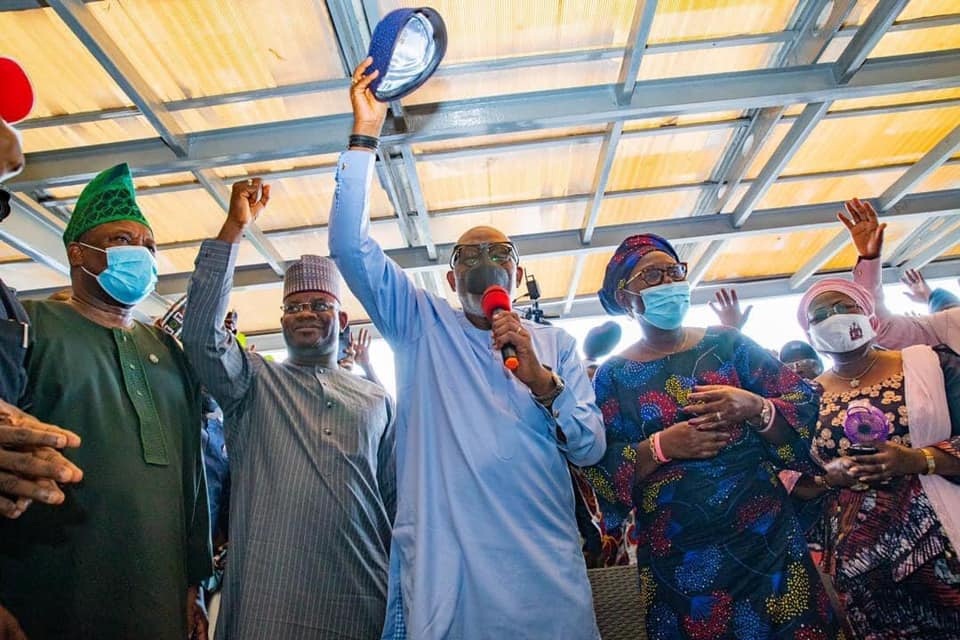 Following the declaration of Governor Oluwarotimi Akeredolu by the Independent National Electoral Commission (INEC), as the winner of the just concluded October 10 governorship election in Ondo state, the Governor has appreciated the people of the state for giving him their mandate for a second term.
Shortly after the declaration, Governor Akeredolu in his victory speech delivered in Owo appreciated the people of the state for their love and trust in him.
The Governor was joined in Owo by four other APC governors and other dignitaries who came to congratulate and rejoice with him on his resounding and well deserved victory.
The Governors included Chairman APC National Campaign Council and Lagos state Governor, Babajide Sanwo-Olu, his counterpart from Ekiti State, Dr. Kayode Fayemi, Osun State Governor, Gboyega Oyetola, and Yahaya Bello of Kogi state.
Other dignitaries were former Governor of Ogun State, Sen. Ibikunle Amosun, Minister of State for Niger-Delta Affairs, Sen. Tayo Alasoadura, members of both the State and National Assemblies, Secretary to the state government, Tayo Oluwatuyi, among other dignitaries within and outside the State.
Governor Akeredolu who expressed his gratitude to God Almighty and the people of the state for the resounding victory, also promised to continue to justify the confidence reposed in him in his determination to continue to bring good governance to the doorsteps of all.
He equally appreciated President Muhammadu Buhari, the Vice President Prof. Yemi Osinbajo, Chairman and members of the Caretaker/Extra-Ordinary National Convention Planning Committee, Governor Mai Mala Buni, the National Campaign Council and Governor of Lagos state, Babajide Sanwo-Olu, the National Leader of APC, Asiwaju Bola Ahmed Tinubu, his other brother governors as well as the state leadership of APC led Ade Adetimehin for their cooperation and unalloyed support.
He thanked the INEC, the security agents and the media and other relevant stakeholders including the royal fathers and religious leaders for their commitment to free, fair and credible poll across the state, saying that the renewal of his mandate in the election is an eloquent testimony to the degree of acceptance by the people of the State.
He stretched his hands of fellowship to his opponents in the contest and called on them to join hands with him to collectively develop the state.
“It is a statement on your assessment of our performance in the last three and a half years. It is unequivocal, direct, inspiring and soul lifting. It is awesome. It is a reward for hard work, dedication, focus, honesty and patriotism. It is also a challenge to us for rededication to service in the interest of our people. On this, we shall not relent.
“This Administration will not be distracted in the discharge of our sacred mandate. The people will continue to be at the centre of all decisions. We will proceed with our administrative style which promotes transparency and accountability. We are determined to set our State, progressively, on the path of real development. Self-reliance is attainable.
In their separate remarks, Babajide Sanwo-Olu, Yahaya Bello, and Gboyega Oyetola, congratulated Governor Akeredolu and rejoiced with him on his well deserved victory, noting that APC would continue to be in charge of the state and the country with unity of purpose.
Sanwo-Olu described the victory as a victory for not only the APC but the people of the state.