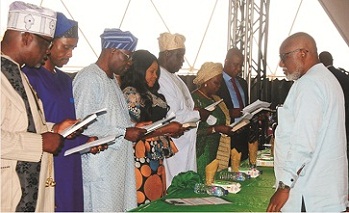 By Kayode Adegbehingbe
|
In August 2017, Ondo State Governor, Oluwarotimi Akeredolu, appointed the first set of commissioners to join him in the saddle to drive his agenda for the state. Two years after, he has made some changes to the “first eleven”, the commissioners meant to be at the front-line of delivering on his mandate to the people of the state.

Three commissioners were asked to leave the cabinet. They are: Solagbade Amodeni (Physical Planning and Urban Development), Taofiq Abdulsalam (Works and Infrastructure) and Ismaila Olurimisi (Culture and Tourism). The governor said that this is to have a state exco repositioned for optimum performance.

The removal of some paved the way for the injection of new blood towards achieving better delivery of dividends of democracy to the people. And now, five new commissioners have been appointed, screened and oath of office has been administered to them.

They are: Fatai Olotu, Yetunde Adeyanju, Titilayo Adeyemi, Akindotun Olubunmi Owanikin and Temitayo Oluwatuyi. And the new commissioners have been charged to see their new positions as call to service with Akeredolu restating his commitment to have the people at the centre of the policies of his administration, saying that he will continue to deliver the dividends of good governance to them and leave the state better than he met it.

At the swearing in of the new commissioners, Akeredolu reeled out the different gains of his administration which the new commissioners are to take to the next level. He said, “We have been consistent in the implementation of our programme of redemption. We have not departed from the path of steady, deliberate and purposeful development since the inception of this administration in February 2017. We shall remain committed towards realising the full potentials of our policy document.”

After the swearing in of the new commissioners, there was a cabinet reshuffle, with changes in some ministries and a new ministry added to the mix. The Governor has given them a matching order to be up and doing.

According to the Chief Press Secretary to the Governor, Segun Ajiboye, “The governor charges all members of the State Executive Council to redouble their efforts, not just to consolidate on gains, but to equally explore fresh opportunities in order to break new grounds of assuring all possibilities, to take the state to loftier heights.

“Believing that slowness to change usually means fear of the new, Governor Akeredolu emphasises that the collective welfare of all in the state and the path to new frontiers for the actualisation of the administration’s 5-point agenda lie in the ability to identify moments for needed change. This is just as he discloses that the changes effected in the state cabinet, as well as the appointments being made alongside are intended to retool the system.

“The Governor, therefore Advises all indigenes of the State to take maximum advantage of the recent changes in the state cabinet, which according to him, were done in good faith and in the utmost interest of the state.”

There, the governor made known his intention for making the changes in what can be regarded as the ‘first eleven’ of the team he had earlier put together to deliver on the goals of his administration, towards lifting the cup of development, advancement and success in the state.

Using the analogy of a football team, it is clear that at this time, the governor is at the second half of his administration. And as a coach, on him ultimately lies the success or failure of the team.

And having a keen sense that time is running out, after the half time, the coach during a football match brings people in from the bench to replace some of the eleven footballers on the field. Changes have to be made, people are brought in while others are taken out. The football term is substitution.

The ball is in the court of the coach, which in this case is the governor. Based on how he is reading the game and how the opposition is playing, the coach needs to respond to the challenges on the pitch and would sometimes instruct the players to change their positions of play, to counter the opposition and be more effective on the field. This is parallel to the cabinet reshuffle Mr Governor has done.

The mandate for the new appointees, either fresh or old but newly moved to a new ministry, is to help the Governor actualise his plans to develop the state. The changes were made in the following areas:

Ministry of Lands and Housing now has Fatai Olotu as the new commissioner, replacing Donald Ojogo.

Ministry of Youth and Sports Development has Akindotun Owanikin as the Commissioner replacing Saka Yusuf-Ogunleye.

Ministry of Information has Donald Ojogo as the new commissioner, who was formerly of the ministry of Lands and Housing.

Ministry of Water Resources, Public Sanitation and Hygiene is a new ministry and is headed by Yetunde Adeyanju

Ministry of Women Affairs and Social Development has a new commissioner in the shape of Titilayo Adeyemi.

Ministry of Physical Planning and Urban Development now has Mr Racheed Badmus as the new commissioner, who was formerly of the Ministry of Natural Resources.

Ministry of Culture and Tourism now has Yemi Olowolabi, formerly of the Ministry of Information.

The commissioners fresh in those ministries are meant to strive for excellence in everything and justify the trust that the governor repose in them. They should ensure that the state moves forward, following the different aspects of the five point agenda of the administration, which are: Job creation through agriculture; Massive infrastructural development and maintenance; Provision of Accessible and Qualitative Healthcare and social service delivery; Rural development and community extension service.

They should think along with those objectives and design their own programme of action to deliver on them without fear or favour. The clock is already ticking for the life span of this administration, the whistle would soon be blown on it, when another election cycle will begin. It behoves on the ‘new’ crop of executives to strive to make their mark in the sand of time, jettisoning parochial thinking to drive their ministries forward on all fronts.

The time is ripe to take a step back and take stock of how well the government has achieved its objectives, how well the different ministries have contributed to them and chart a better way forward. The government should take stock of the sectors that are already feeling its impact and look for ways to even make things better, while also ensuring that those areas which hitherto have been left out have greater attention paid to them.

The Ministry of Lands and Housing now under the new leadership of Fatai Olotu is meant to administer those issue for which it is named. The ministry is a repository of permits and oversees regulations that has to do with land administration and housing in the state and should therefore ensure that there is no issue of building collapse in the state.

There may be the need for the ministry to be more proactive about its activities, and communicate what it does to the public. It is sad that a search on the internet reveals that the ministry does not a have a website.

The Ministry of Youth and Sports Development with Akindotun Owanikin as the Commissioner replaces Yusuf-Ogunleye, should focus on making Sunshine Stars FC better.

In the past two seasons, the premier football club in Ondo State barely escaped relegation. For a team which was once continental contenders, this is not a savoury news to say the least. Ondo State deserves a more developed sports sector, in view of the huge amount of talent in the state, lying fallow, untapped.

In addition, some may argue that there has been a lull in the ‘Youth Development’ aspect of the ministry. This should now attract more of the attention of the new commissioner.

Donald Ojogo is the new image maker and spokesman for the administration as the Commissioner for Information. He has the task of bridging the communication gap between the government and the people.

As everyone knows, communication is a delicate thing; words spoken cannot be unspoken. And while the government is focused squarely on delivering on developmental objectives and achieving the goals he has set for himself, which would entail certain changes following the think anew act anew mantra of the administration, the Ministry of Information must ensure that the people are carried along, and particularly when it comes to the properly branding of the administration, impacting on its acceptability among the people.

Ministry of Water Resources, Public Sanitation and Hygiene, is a new ministry and is now headed by Yetunde Adeyanju who is coming from her stint guiding Ondo State Rural Water Supply and Sanitation Agency (RUWASSA) with the KAMOMI AKETI accelerated water scheme as a linchpin of her achievements there, a programme which has been adopted by the federal government.

She comes highly recommended to head the new ministry. And now that the government has embarked on the project of ensuring that Ondo State is Open Defecation free in a few years, the administration has accented this determination by creating a ministry to give cabinet level drive to the initiative.

With Adeyanju’s elevated platform as a commissioner over a ministry, what the people should now experience is an acceleration of the achievements in the different areas of its mandate. The ministry has a role to ensure that the people have access to clean water and that they have a new orientation in the proper disposal of human excreta, ensuring the attainment of specific sustainable development goals as outlined by the United Nations. These goals should be pursued with single minded devotion, to better the lives of the people of the state.

Ministry of Women Affairs and Social Development has a new commissioner in the shape of Titilayo Adeyemi. The ministry has hitherto been without a substantive political head for some time and the new ‘helms-woman’ has an opportunity to ensure that activities towards the betterment of the women are ratcheted up. The commissioner is coming in after serving in her role as Senior Special Assistant on Women Affairs to the Governor. So she is not a green horn. With the new development, the people of the state expect more government-initiated policies that would serve the women folks in the state.

Ministry of Works and Infrastructure, now headed by Saka Yusuf-Ogunleye has been one of the most visible ministries in the state as the governor has broken new grounds in the construction and rehabilitation of roads all across the state and has been accumulating accolades for the strides already made.

The new commissioner would be expected to add to the gains of the past. As more roads are made, even much more in need of rehabilitating, because of the long-term deficit in that sector.

These and other commissioners already have their matching order. Its the second half for the administration, there is no time to waste at all.