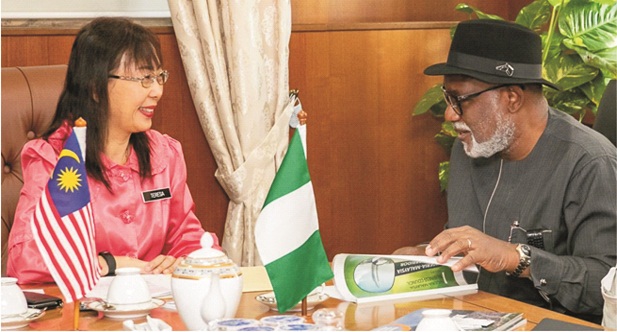 By Kayode Adegbehingbe
|
Recently, the Ondo State governor, Oluwarotimi Akeredolu was in United Arab Emirates (UAE) and Malaysia where he showcased the potentials of the state for buy-ins and investments from foreign countries and companies.

The 10-day trip which exposed the state to the world is to bring the world to the state through interactions with representatives of foreign countries, companies for government to government collaboration and foreign direct investment.

To show how serious the Ondo State is, one of its first move was the setting up the Ondo State Development and Investment Promotion Agency (ONDIPA) to make things easy for investors as the bridge for foreign investment to come into the state.

Among the achievements of the government on this trip was the signing of a Memorandum of Understanding, MoU, with the Dubai Port Authority on the Port of Ondo.

The setting up of the Port has been a prime objective of the administration’s drive to put the state on the global maritime map, by exploring and exploiting the seashore endowment of the state in the southern part.

Having concluded various studies on the port, the state government is not resting on its oars but is moving forward to see that what is on paper becomes realised.

The feasibility study of the Port was prepared by a company called MTBS of Netherlands and has been forwarded to the Nigeria Ports Authority (NPA).

Now that an MoU has been signed in UAE, it is expected that the project will have a new lease of life, with all the benefits it can bring to the state.

Therefore, greater days are ahead for Ondo State as the seed of maritime development being planted today will become a big tree tomorrow. The maritime glory of the state is about to be uncovered, so to speak.

The proposed multipurpose Deep Sea Port, according to projections, would gulp $1.3billion and create employment for thousands. And there is also a free trade zone which would be set up for companies to take advantage of the opportunities occasioned by the setting up of the Deep Sea Port.

“We are doing things for the generation to come. I have always believed that there should be a beginning. We have started, there is no going back.

“I was privileged to travel with President Buhari to the Netherlands. We went on a boat and visited the ports. I told him,  if anything like this must happen in Nigeria, it must be in Ondo State. Not only that, the President has said it most of the times that he knows that Ondo is the right place for a deep-sea port.

“We should not play politics with everything. It is not our making but providence has put us where we are today. Where we are today, is the best place to have a deep-sea port.

“Ours, as a state, is to prepare the ground and show the feasibility and bankability. Can Ondo State do it? No, Ondo State cannot build or own a port. But there are many people who are willing to invest.

But it does not end at that, added to the Deep Sea Port as a subject of the MoU signed in UAE, according to reports, is “collaboration in new conventional, renewable and hybrid power projects, including the potential to re-power existing power plants, exploring the potential to develop oil blocks and strategic storage terminals, developing cashless solutions for internally generated revenues (IGR) on direct assessment, and any other projects of mutual interest.” All these are to gain strength from what that country have developed and advanced in.

When it comes to power generation, which was highlighted in that MoU, Nigeria is lagging behind and that has led to stunted development with the supposed giant of Africa remaining largely a paper tiger.

But the Akeredolu-led administration in Ondo State has not folded its hands in this regard.

Rather than wait for the federal government to do everything when it comes to generation of power, the state government, following its think anew, act anew philosophy is doing the needful.

The special adviser to the governor on utility, Engr Tunji Ariyomo, in a statement said that the Gbagira power plant is the fifth in the number of successfully completed community power interventions by the government in the two years of its existence in innovative solutions to the power problem confronting the nation.

He said: “the Ondo State government just last year provided off-grid solar intervention in Ebute-Ipare, Aboto and Igbobini towns through another private firm, Messrs R. R. Reynolds. We are delighted that PIND and A4 and T Solutions have continued this serious business of providing quality 24 /7 electricity for our people using alternative technology.

“We wish to appeal to the people to support all these initiatives by ensuring the protection of the facilities.

“We appeal to the people to ensure prompt payment of their energy bills. It is only by so doing that the respective private companies can recoup their investments and be able to remain in business.”

This is an impressive achievement by all standards and the people and businesses in those areas are now well placed to experience uninterrupted power supply in what can be described as the new face of Ondo State. And the UAE MoU would further light up the state.

Another aspect of the MoU is “developing cashless solutions for internally generated revenues (IGR) on direct assessment”.

In lGR, the state has not rested on its oars, and is now rated the best in year on year IGR improvement in the country.

The state leaped from N11billion IGR in 2017 to N25billion in 2018. This represents 127percent increase, having deployed various tools and initiatives to turnaround the revenue generating profile of the state.

Though the state is not where it was in revenue generation, it is far from where it used to be hence the importance of that MoU.

As mentioned earlier, an aspect of the MoU also involves the petroleum industry, i.e. development of oil wells and strategic storage terminals.

In that sector, Ondo State had signed an MoU with Crown Refinery & Petrochemical Limited, a crude oil refining firm, to build a $500 million refinery in Ilaje Local Government Area of the state.

Speaking on the project, the CEO, Mr Kassim Adeleke, said it will create a total of 2000 direct and indirect jobs for Nigerians, with much consideration for the host community.

His words: “It is expected that the upcoming private refineries, ours included, would be able to meet Nigeria’s need for refined petroleum products.

“The market is deep enough! For us, it is more of contributing to an industry output that will meet the demand.”

Adeleke praised the state for welcoming the idea of the refinery, seeing that it had approached other states with no progress made. He appreciated the investment-friendly atmosphere that has been created in the state.

The $500m project would be a plus for the state’ petroleum industry, and the MoU in UAE has taken it a step further.

Before the signing of the MoU in UAE, the governor was at the Annual Investment Meeting (AIM) held there. It is an initiative of the UAE Ministry of Economy.

The forum is described as the World’s Leading Platform for Foreign Direct Investment (FDI), where the governor met with several investors at the event, showcasing the potentials of the state to attract investment.

While in UAE, the focus was the Deep Sea Port and other technology and industry related issues, in Malaysia, it was agriculture.

Governor Akeredolu met with representatives of the Malaysia Agriculture and Research Development Institute (MARDI) on how to revive the rice value chain program in the state.

Not only that, discussions were also held on Cassava, and the general development of agribusiness in the state.

According to reports, the other agricultural potentials of the state showcased in Malaysia were: Palm oil, Rubber, Timber, Cocoa, Pepper and Cash, covering the whole gamut of their value chain development.

Malaysia has made giant strides in agriculture, from its humble beginnings decades ago when it came to Nigeria to pick palm oil seedlings. Now it has become a reference point. There is therefore much the state can learn and benefit from them as one of five point agenda of the administration is: Job creation through Agriculture, Entrepreneurship and Industrialisation.

This recognises the dire need to bridge the employment gap through agriculture, in view of the teeming unemployed youth in the state as it is clear that an idle hand is the devil’s workshop.

And with the comparative advantage of the state in the sector with its fertile land, it is an avenue to engage thousands of people who want to better their lives by doing things for themselves. And the state has decided to come alongside them to help.

In his inaugural address as the governor of the state in February 2017, Akeredolu, speaking on the premium he would place in agriculture, said: “we shall deploy considerable energy into agriculture. Through this, we hope to generate employment for the teeming youths. This administration will do everything possible to encourage investment in agriculture. Our youths must be ready for training necessary to kick-start this mission.

“We must begin to deemphasise white-collar jobs. The era of unproductive civil service is winding to a close, gradually. The current economic realities make the deployment of the unemployed to other sectors, other than agriculture and rural development, unsustainable. We must train our youths to acquire entrepreneurial skills as a corollary to our programme on agriculture.”

It is clear that both the visit to Malaysia and to UAE, when they come to fruition are meant to lead to creation of employment.

This government is driven by that and seeks to leave a legacy of being a job creating one.

As the Governor himself have realised, there is only so much government can provide by way of direct employment in the civil service, as it would then have to deal with ever increasing wage bill that could drown out all initiatives.

Hence it has put its eggs in the basket of driving investment into the state from all angles, facilitating an industrialisation drive.