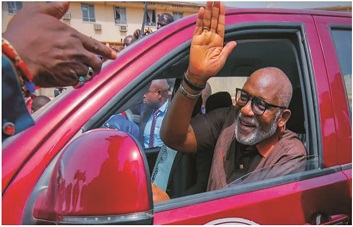 By Fisayo Falodi
|
The security of lives and property of the citizens is universally accepted to be one of the major preoccupations of a responsible government. Security guarantees peace and socio-economic advancement of a society.

Governor Oluwarotimi Odunayo Akeredolu, SAN, pledged before the people of Ondo State on February 24, 2017, to protect the provision of the 1999 Constitution of the Federal Republic of Nigeria (as amended) that guarantees the security of the lives and properties of the residents alike.

Security refers to the measures that are taken to protect a society from dangers or threat of residents being attacked or killed by assailants or enemies to ensure peaceful relationship among individuals and social groups. Security is also said to be freedom from or resilience against potential harm caused by others.

When Akeredolu assumed power in 2017, he inherited a state in total dissillussionment, including insecurity arising from armed robbery, kidnapping and constant clashes between herdsmen and farmers, among others.

But Governor Akeredolu took the bull by the horn  and directed his energy towards pursuing various workable efforts to make the length and breadth of the state safe for all, including visitors. First, the governor ensured robust synergy and genuine relationship among all the security agencies in the state. The governor’s monthly meetings with the security agencies in the state were not handled with kid’s glove. Even impromptu or occasional meetings where isuees that were meant to guarantee peaceful co-existence among the residents were adequately deliberated upon.

Traditional and religious leaders were not left out in the security matters because of their role in ensuring peace in the society. Akeredolu’s respect for the traditional and religious institutions, no doubt, contributed in no small measure to the resounding peace all the social groups and business associations are currently enjoying in the state.

Apart from Governor Akeredolu’s regular meeting with the leaders of the two institutions, his frequent reminder to them to always preach the essence of peace among their followers complemented the efforts made by the state government to make the Sunshine State unhabitable for criminals.

Other qualities that distinguish a good leader are his decision-making capacity, creativity, innovative ideas and ability to inspire others for effective service delivery. Upon his realisation that the Ondo State Police Command lacked adequate logistic, Governor Akeredolu, who refused to abdicate his responsibilities in other areas that equally demanded his attention, acquired patrol vans for all the security agencies in the state. He also assisted the agencies in other areas, especially, the army in fixing the deplorable roads in their barracks. These were done to boost the morale of the security personnel for service delivery.

In a similar gesture, the governor presented many speed boats to the Naval Operational Base in Igbokoda in Ilaje Local Government Area of the state to checkmate piracy and kidnapping, among others, in the Southern Senatorial District of the state.

The push to ensure the establishment of three more police commands in the state have been commended as the right decision by stakeholders. The establishment of the commands in Ikare-Akoko, Oba-Ile and Okitipupa, according to some observers, have guaranteed stable and sound business-friendly environment, as well as improved the security of lives and properties across the state.

The frequent clashes between herdsmen and farmers that have turned the two groups to sworn enemies in some parts of the country is alien in Ondo State. Because of his determination to ensure peaceful co-existence among all the interest groups across the state, Akeredolu adopted Feed Lot System as a new strategy for grazing of cattle in the state. The Feed Lot System was adopted early in the life of the administration to prevent likely crisis that may arise from open grazing of cattle.

The Senior Special Assistant to the Governor on Agriculture and Agric-business, Mr. Akin Olotu, had confirmed that the Feed Lot System was introduced by Akeredolu as short term and long term strategies to prevent classes between the two groups. The system was adopted in continuation of the governor’s efforts to guarantee peace for all.

It will be recalled that the two groups met at Isuada in Owo Local Government Area where they all agreed to accept the new system as a way of rearing cattle. At the meeting, it was agreed that nobody should engage in night grazing. Children should be discouraged from grazing of cattle and that strange herders should be identified and reported to the appropriate authorities.

Shortly before the Feed Lot System was introduced, Governor Akeredolu held series of peace meeting with representatives of Fulani herdsmen and traditional rulers from the Northern Senatorial District of the state where he urged them to always resolve their differences through dialogue, rather than taking up arms against one another.

The security summit organised by his administration was meant to interact with experts on ways to tackle challenges that were inimical to peaceful society.

At the summit, the experts and representatives of security agencies agreed on the pathway towards the resolution of strange occurrences in Ondo State. The summit therefore came up with Security Policy Document which suggested holistic approach to tackle the criminal activities in the state.

From the information available, not a few people are now appreciating the governor’s efforts geared towards guaranteeing peace in the state. The people are delighted to learn that the efforts  have boosted investors’ confidence in the state. There is no reason to doubt the fact that the various business concerns and companies springing up at the Ore Industrial Hub are as a result of the peace which Akeredolu’s government has guaranteed across the length and breadth of the Sunshine State.

A security expert. Mr. Abiodun Agbemola, observed that the relative peace being enjoyed in the state has improved the housing development in the state. He noted that the youths engaging in Omo Onile syndrome, a group of young people disturbing and attacking contractors at building project sites, have now realised the stupidity in involving themselves in unlawful activities.

Agbemola is convinced that the governor’s love and promotion of peaceful society where people will be free to carry out their lawful businesses unchallenged has improved the psychological state of health of the residents. There is, therefore, no need for travellers to nurse the fear of being kidnapped or attacked by armed robbers.

Governor Akeredolu’s strong support for the formation of the South-West Security Network popularly known as Operation Amotekun gave credence to his love for permutations and considerations that promote the people’s socio-economic interests.

The governor, who could not afford to be emotive in taking decisions for the benefit of his people, allayed the fear being nursed in some quarters over the launch of Amotekun Security Network.

Amotekun is a security network formed by the South-West governors to combat the disturbing crimes in region.

With zero tolerance to crime, the governor described the Amotekun Security Network as a necessary intervention and pragmatic solution required to tackle the criminal activities currently threatening the peace and the economic development of the region.

Falodi is the Press Secretary (Print) to Governor Akeredolu