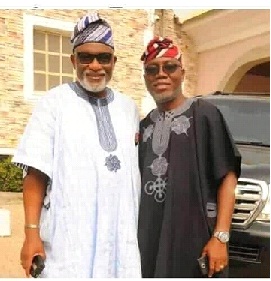 One of the ‘Aketi’ support groups, Ibi Giga Grassroot Network – Ondo South has expressed optimism that the State Governor, Arakunrin Oluwarotimi Akeredolu will be re- elected for the second term in Office.
In a statement, the Head of Media and Communications of the group, Bombay Ladi Okunniga reiterated that Arakunrin Oluwarotimi Akeredolu will be re-elected on October 10, saying he has performed creditably well”.
“His achievements in the last three and half years would play a big role in his re- election bid.
The group added that people have felt the impact of Akeredolu’s ongoing new Ondo State and they are willing to vote for APC in the forthcoming election.
Ibi Giga Grassroots Network-Ondo South, is one of the support groups working for re-electing Arakunrin Oluwarotimi Akeredolu for second term under the leadership of Mr Lucky Aiyedatiwa who was the former Ondo State representative on the board of Niger Delta Development Commission (NDDC)and now the running mate of Arakunrin Oluwarotimi Akeredolu SAN in the forthcoming gubernatorial election.
According to the statement, “Akeredolu is loved at the grassroots.
“We are very proud of him and what he brought into governance, for these we are happy that even ordinary people on the streets are happy that the change and the new Ondo State has affected them positively” , the statement said.